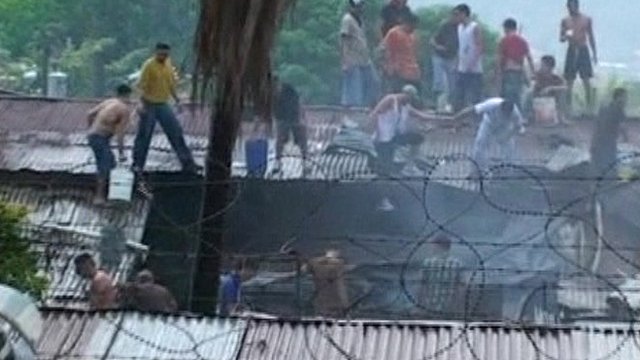 Chief of police Walter Amaya: "What provoked this incident was a dispute between rival gangs"
Continue reading the main story

At least 13 people have died in unrest at a prison in Honduras, officials say.
They said inmates began fighting among themselves at the San Pedro Sula prison, in the north of the country, and that a fire had then broken out.
Police commissioner Yair Mesa said the riot had been brought under control, the Associated Press news agency says.
Last month, at least 360 inmates died in a fire at Comayagua prison north of the capital. Officials said it may have been caused by a discarded cigarette.
During the latest riot, one prisoner was decapitated and his head thrown in front of the prison entrance, according to local media reports.
"The uprising has been put down without the need to fire shots," Mr Mesa said from inside the prison.
The prisoners themselves appeared to have fought the fire inside the facility, city fire service chief Jose Danilo Flores told AP.

The inmates had prevented firefighters from entering earlier in the day, he added.
Security Minister Pompeyo Bonilla said the fire at the facility had "once again highlighted the critical situation" in the country's prisons, Agence France Presse reports.
Prisons in Honduras hold some 13,000 inmates in a system designed for 8,000.
The government has promised to reform the country's prison system but the task ahead of them is huge, reports the BBC's Central America correspondent Will Grant.
The problems facing the prison system include chronic overcrowding, opposing street gangs being housed side-by-side, rampant corruption and crumbling infrastructure in jail buildings, he says.
at March 30, 2012