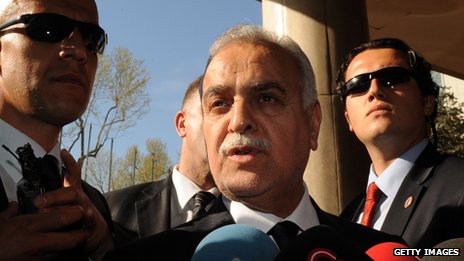 Tariq al-Hashemi is now in Turkey, where he has held meetings with Turkish and Iraqi Kurdish politicians
Continue reading the main story

Iraq's fugitive vice-president Tariq al-Hashemi has been sentenced to death in absentia after a court found him guilty of running death squads.
The court ruling came as at least 45 people were killed in a wave of about 24 attacks across Iraq.
Hashemi was the most senior Sunni Muslim in the predominantly Shia Iraqi government until he was charged last December and went on the run.
The charges against him sparked a political crisis in Iraq.
Other Sunni politicians denounced Shia Prime Minister Nouri al-Maliki - who issued the warrant for Mr Hashemi - as a dictator, accusing him of deliberate provocation that risked plunging the country back into sectarian conflict.
Correspondents say the fragile government coalition between Sunnis, secularists and Shia has seemed in danger of collapse ever since.
Sunni insurgents linked to al-Qaeda have been blamed for much of the recent violence in Iraq. 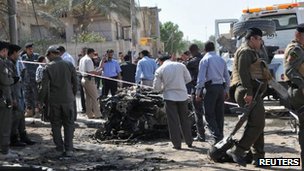 One of the attacks was near the French consulate in the southern city of Nasiriya
Sunday saw a fresh wave of killings:
There were also attacks in Tuz Khurmatu, Baquba, Basra and Samarra.
Sectarian tensions
The Iraqi government issued the warrant for Hashemi's arrest on 19 December 2011, the day after the last US troops left the country.
Continue reading the main story 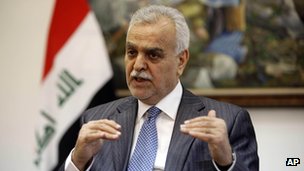 He fled first to the largely autonomous Kurdish north of the country, and from there to Qatar and on to Turkey.
Prosecutors said Hashemi was involved in 150 killings. During his trial in absentia in Baghdad, some of his former bodyguards said Mr Hashemi had ordered murders.
He says the charges against him are politically motivated and has accused PM Maliki of fuelling sectarianism.
On Sunday, an Iraqi court found Hashemi and his son-in-law guilty of two murders and sentenced him to death by hanging. The judge dismissed a third charge for lack of evidence.
Although violence has decreased since its peak in 2006 and 2007, attacks have escalated again after the withdrawal of US troops from Iraq at the end of last year, amid increasing political and sectarian tensions.
The Iraqi government has been hampered by divisions between Sunni, Shia and Kurdish political groups.
The Iraqi government said July 2012 was the deadliest month in nearly two years, with 325 people killed.
Former Iraqi leader Saddam Hussein was a Sunni, and many Sunnis believe they are being penalised by Shias, who have grown in influence since the US invasion.
Sunnis have accused Mr Maliki of taking an authoritarian approach to government.
at September 09, 2012