Northumberlandia: The naked lady of Cramlington 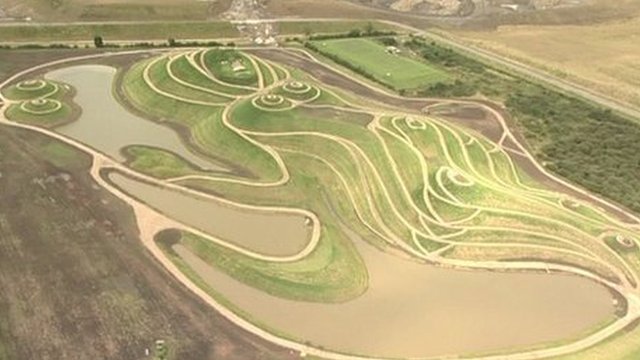 Northumberlandia: A face in the landscape
Continue reading the main story

Northumberlandia, also known as "The Lady of The North" is a piece of public art built into the landscape of Cramlington in Northumberland.
Planned for seven years and built over two, she is the largest landscape replica of the female body ever seen in the world, her creators say.
She stands 112ft (34m) high at her tallest point, her forehead, and is 1,300ft (400m) long.
She is made up of 1.5m tonnes of rock, soil, stone and clay.
During a visit to the site last year, Charles Jencks, who began his designs for Northumberlandia in 2005, admitted the artwork was "much bigger than I ever thought".
Her creation was part of the planning application made by the Banks Group and Blagdon Estate when they requested to create what is now the largest surface mine in England, Shotton Surface Mine.
Made from the by-products of that opencast mine, the figure is created in layers.
Continue reading the main story

First is a core of rock, then clay and lastly soil, topped with grass seed that will withstand being walked on.
Some of her features are artistically highlighted with stone from the mine that is often used for the restoration of old buildings.
Princess Anne will visit Northumberlandia on Monday to officially declare the site open, although the public will not be able to see it for themselves until Wednesday.
Katie Perkin, communications manager for the Banks Group, said: "It cost £3m for us to create Northumberlandia. We wanted to give something back.
"When we end a project on a mining site we restore it. With this project we heard there was some local concern about a negative effect on tourism, so we decided to go one step further than usual and create a tourist attraction to leave as our legacy.
"We held previews and worked with Disability North, amongst other local groups, to make sure the site was as open to everyone as possible, and I think we've succeeded."
Paths circle over the reclining body, offering views of Cramlington and a rare look into the nearby mine.
The Snowy Owl, a pub just to the right of Northumberlandia, will undoubtedly benefit from the development, but manager Gina Ward is also looking forward to the opening for personal reasons.
She said: "I suppose it will bring extra business to the area, and that's magnificent, but I love the idea and I love that they will be making it into a nature reserve. I think it is going to be brilliant."
'A new Angel'

Sue Stevenson, who works down the road at a petrol station, feels differently.
She thinks the money could have been spent on something more for the children in the area, but admitted: "I'm not a walker so it's not my kind of thing."
Her comments were overheard by Colin Battensby, from Blyth, who works in Cramlington. He said he travels past the site every day and thinks the creation will attract people to the area. 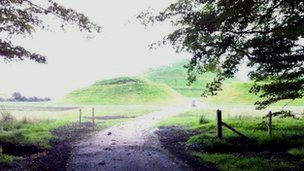 The entrance to Northumberlandia takes the visitor through woodland before revealing the figure
He said: "I think people will come and see it like The Angel (of the North).
"I don't know if people will come as a holiday just to see it, but if you're in the area, you'd go."
The Banks Group says there has already been a positive impact on the local community.
Mrs Perkin said the Shotton Surface Miners were asked to contribute their ideas during development of the project.
She said: "We employ about 150 people at the mine, and around 50% of those are locals.
"We saw real artistic flair in some of the staff and offered them a chance to take part. They made this.
"Local hands made this structure that will last for generations to come."
Northumberlandia will be open to the public for the first time between noon and 16:00 BST on 5 and 8 September, with further information on subsequent opening times available on the Northumberlandia website.
at September 02, 2012