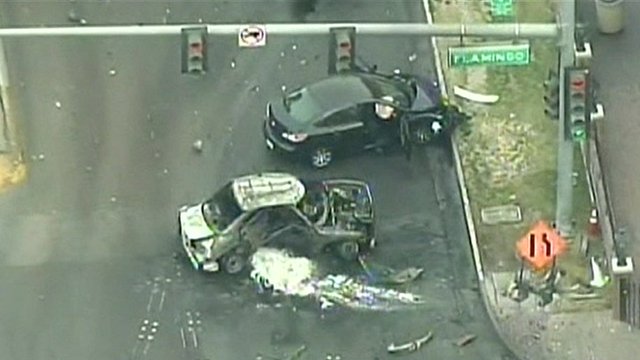 Footage from the scene shows burnt out vehicles on the Strip
Three people have died and at least six others were injured after a "rolling" gun fight and crash involving several cars in Las Vegas, police say.
Six vehicles were caught up in the crash - including a taxi that burst into flames - at a crossroads on the busy Las Vegas Strip.
Police say shots were fired from a Range Rover Sport at a Maserati before the Maserati hit the taxi.
The Maserati driver and the taxi's driver and a passenger were killed.
A passenger from the Maserati was among several others taken to hospital.
'Hotel altercation'
The Range Rover Sport, which was said to have large black wheel rims, had fled the scene by the time police arrived.
Continue reading the main story

Mark ThompsonBritish tourist
Investigators have spoken to the authorities in three neighbouring states in an attempt to trace the vehicle.
The incident occurred about 04:30 local time (12:30 GMT) at the junction of Flamingo and Las Vegas boulevards, police Sgt John Sheahan said.
Authorities believe an altercation that began at a hotel prompted the attack. The two vehicles were stopped at a red light when a person in the Range Rover Sport opened fire.
Authorities say several people were in the car.
Four casualties were taken to the University Medical Center hospital, three of whom were treated and released, said a spokeswoman for the facility.
One person, whose condition was not disclosed, remained in hospital.
The site of the crash is in the heart of Las Vegas, near some of the most famous hotels on the Strip, including the Bellagio and Caesars Palace. 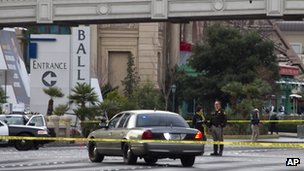 The crash site is near the Bellagio and Caesars Palace hotels, in the heart of the Strip
The central location can be busy at all times, Las Vegas police officer Jose Hernandez told CNN.
Police say it is possible others were hurt.
British tourist Mark Thompson told the Associated Press news agency: "This doesn't happen where we come from, not on this scale.
"We get stabbings and gang violence, but this is like something out of a movie. Like Die Hard, or something."
This is the third incident of violent crime to hit the popular casino resort this month.
Two people were wounded in a shooting at a Las Vegas car park on 6 February.
And a tourist was stabbed in a lift at the city's Hotel Mandalay Bay on 16 February.
at February 21, 2013

Some were practical, of course, but others were psychological and emotional.
Brazenhead is a great place to go with your family or for a
business lunch or dinner, but if you are looking for a party atmosphere, this isn't it. They feature almost nightly drink specials and some form of entertainment every night of the week--DJ's,
live music, trivia, you name it.

The only hurdle to accessing this is of course human limitations and the fact that the brain
does not function solely as a learning tool for
the human being. I believe my exact words were "I don't want to be your dirty little secret. The decline of the East side blues scene was disheartening, but, it also gave rise to the need for a fresh start, which came in the form of the next blues-only venue, Antone's, founded by the late Clifford Antone, during the summer of 1975.

squares with various tea leaves and tea flavors inside each square.
I won't spoil your surprises and give away any more details. Now, one of my co-workers was applying to the Secret Service and I knew that I was down as a reference for her.

Fashion Games of Teen Girls Interested Are Fun These challenges are at times shared amongst buddies.
This was zero cost because the students went to local stores
and asked for either donations and gift cards to purchase
these items. At each house you have the hostess serve something small to eat, and
host a small game.

Take a look at my page; for sale

DJ spins out on Saturday nights. At the end of each round
read out the cumulative scores. The buccal cavity is a
small cavity that has neither jaws nor teeth.


Here is my web blog pub quiz and answers

(Thank you rounds are always welcome, of course.

Below are listed a few popular pubs where one can chill in Mumbai.

(Thank you rounds are always welcome, of course.
Local country clubs are offering trivia fun for as little as forty dollars per couple.
28.

Also, we need to determine the rounds of the quiz
according to it. At the end of each round read out the cumulative scores.
The food is decent and the drink specials on Tuesdays include $2.