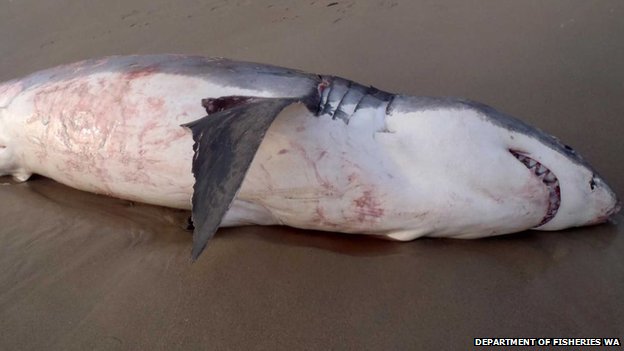 A great white shark that washed up on an Australian beach may have choked on a sea lion, fisheries officials said.
The 4m-long (13ft) shark was filmed thrashing about in shallow waters at Coronation Beach, north of Perth.
The Western Australia Department of Fisheries said in a statement that it found "no visible signs of injury or disease" but discovered "a large Australian sea lion" in its throat.
Scientists said the shark could have been trying to dislodge the blockage.
"This could explain why the shark was exhibiting such unusual behaviour," principal research scientist Rory McAuley said.
"Such a large object may have damaged the shark's internal organs or impeded water flow into his gills, contributing to his death."
"Alternatively, the shark may have accidentally become stranded in his attempts to get rid of the obstruction." 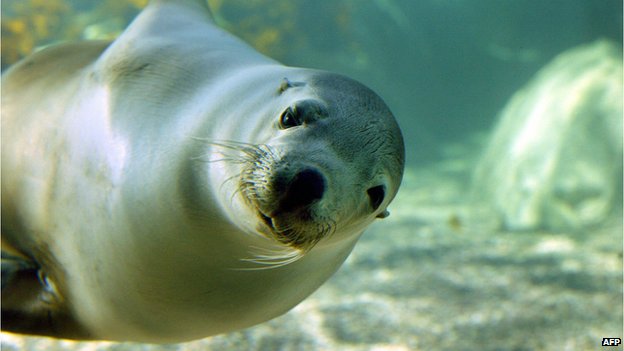 The carcass of the Australian sea lion, the same species as this one, was lodged in the shark's throat
Eyewitness Brad Tapper, who had been at the beach at the weekend with his family, told the Western Australian newspaper that the shark returned to shore despite efforts from some beachgoers to tow it out to sea.
"When we spotted it, it was about 50m off shore and we thought it was a diver or something," he said.
"We went to look at it, it started kicking and thrashing around again so we thought it was time to leave."
The shark, which officials said had been fitted with an acoustic tag in South Australia this year, was found washed up on the sand on Tuesday.
While great white sharks are protected in Australian waters, a controversial cull has been under way aimed at reducing attacks on humans.
Critics argue that a shark cull is not the answer and will damage the sea's delicate ecosystem.
at July 17, 2014