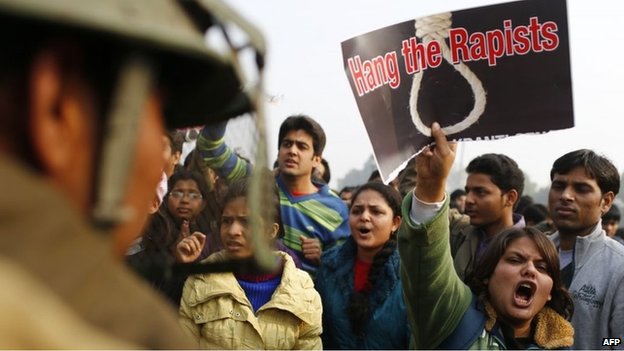 A six-year-old schoolgirl has allegedly been raped by two staff members at a prominent school in the southern Indian city of Bangalore, police say.
The alleged assault happened on 2 July but her parents discovered it only a few days ago after she complained of stomach ache and was taken to hospital.
Meanwhile, hundreds of parents have protested outside the school, pulling down its gates and shouting slogans.
Police have registered a case, but they are yet to make any arrests.
The BBC's Andrew North in Delhi says it's the latest in a series of sexual assault cases that have made headlines in India.
Figures show more rapes are being reported in general, which is a sign that the crime is being taken more seriously, our correspondent reports. But India's sluggish judicial system means it can take years for victims to get justice.
New Prime Minister Narendra Modi has promised a zero tolerance approach on crimes against women, but violence and discrimination against women remain deeply entrenched in society.
The girl was allegedly raped by a security guard and a gym teacher, but as there are multiple guards and gym instructors in the school, police say they are trying to identify the guilty, BBC Hindi's Imran Qureshi reports from Bangalore.
As news of the incident became public, hundreds of parents gathered outside the school, protesting against the alleged insensitivity of the school management.
"They have handled it very shoddily," said Vivek Sharma, parent of a boy studying in the school.
On Thursday, school chairman Rustom Kerawala addressed a meeting of the parents where he offered his "sincere apologies" and promised "full co-operation" with the police investigation.
Scrutiny of sexual violence in India has grown since the 2012 gang rape and murder of a student on a Delhi bus.
The brutal crime led to massive outrage in the country and forced the government to introduce tougher anti-rape laws, including the death penalty in rare cases.
But the law appears to have failed to act as a deterrent. Statistics from the National Crime Records Bureau for 2013 show one rape was reported every 21 minutes.
at July 17, 2014