French teacher dies after being 'stabbed by parent' 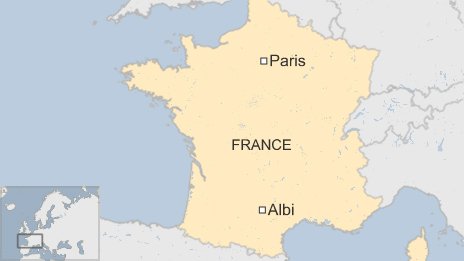 A 34-year-old French teacher has been stabbed to death in front of her pupils by the mother of one of the students, police say.
The incident took place in at the Edouard Herriot primary school in Albi, southern France, on Friday morning.
Police said the suspect was immediately detained. It is not yet known if her child was in class at the time.
President Francois Hollande sent France's education minister to the school to lead the government response.
"All state services will be mobilised to take care of these children and the staff who witnessed this awful tragedy," Mr Hollande said in a statement.
Cardiac arrest

Albi prosecutor Claude Derens was one of the first at the scene.
"When I arrived at the scene they were trying to revive her", he said. "She was in cardiac arrest in her classroom".
Local media reported that the suspect was already known to police over allegations of child neglect.
She is alleged to have shouted "I am not a thief" before the stabbing, media reports said.
The pupils who witnessed the attack, reported to be between five and six years old, are receiving counselling.
A spokesman for the education minister said that he was "deeply shocked by this crime, which plunges the end of the school year into mourning".
"This tragedy confirms there is a need to fight against violence in and around schools, to protect schools, teachers and students" the spokesman said.
Correspondents say the incident comes at a time of growing concern in France over assaults by parents on teachers.
at July 04, 2014