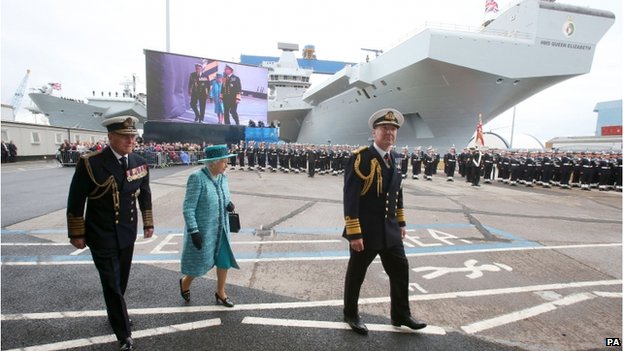 Out of media player. Press enter to return or tab to continue.
A bottle of single malt whisky was smashed to mark the naming of the aircraft carrier, described by the Queen as ''a magnificent achievement''
Continue reading the main story

The UK's largest warship marks "a new phase in our naval history", the Queen has said, as the vessel was officially named in her honour at a ceremony at Fife's Rosyth Dockyard.
A bottle of whisky was smashed on the hull of the 65,000-tonne HMS Queen Elizabeth - the first of two new Royal Navy aircraft carriers being built.
The Red Arrows flew over the dockyard before the ship was officially named.
First Sea Lord Admiral George Zambellas said the ship was "fit for a Queen".
"HMS Queen Elizabeth will be a national instrument of power and a national symbol of authority," he said in a speech.
"That means she will be a national icon too, all the while keeping the great in Great Britain and the royal in Royal Navy."
'Inspiration and pride'

Addressing the audience, the Queen said the "innovative and first class" warship, the largest ever to be built in the UK, ushered in an "exciting new era".
"In sponsoring this new aircraft carrier, I believe the Queen Elizabeth will be a source of inspiration and pride for us all," she said.
"May God bless her and all who sail in her." 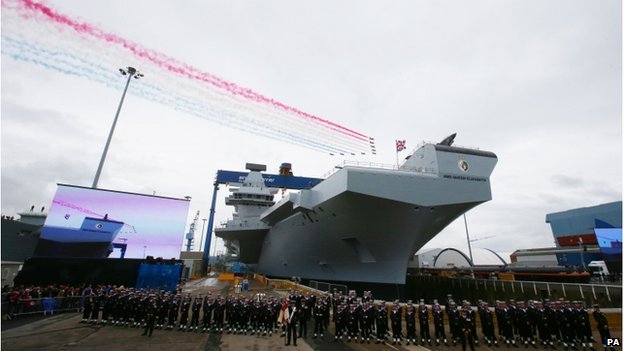 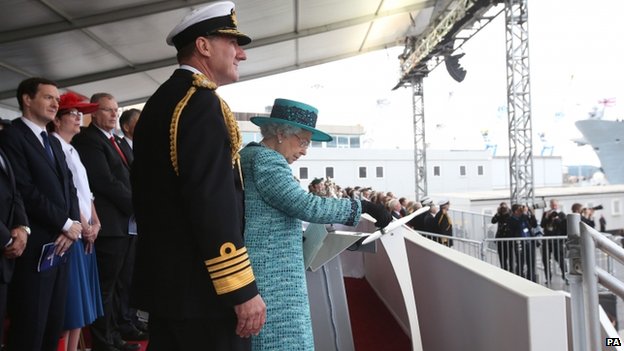 The Queen pressed a button to release a bottle of whisky, which smashed against the ship 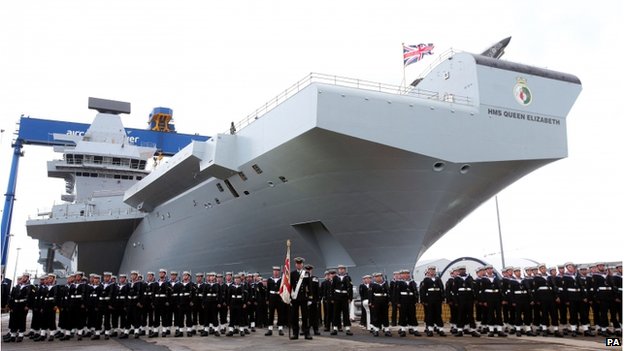 HMS Queen Elizabeth is the first of two new Royal Navy aircraft carriers being built
About 3,500 people involved in the design and construction of the carrier watched the celebrations, alongside dignitaries and politicians including Prime Minister David Cameron, First Minister Alex Salmond and former prime minister Gordon Brown.
Mr Cameron said it was a "very proud day" for Scotland and the UK, while Mr Salmond said it was a "huge day" for the workers and their families.
Ian Booth, of the Aircraft Carrier Alliance which is overseeing the ship's construction, said it was a "historic occasion".
"The ship truly reflects the very best of British design and ingenuity and we all feel an enormous honour to see Her Majesty name her today," he said in a speech.
The Red Arrows fly-past was followed by a procession of three generations of Royal Navy aircraft, including a historic 1950s de Havilland Sea Vixen fighter - the last and only flying aircraft of its kind in the world.
The Queen oversaw the ceremony by pressing a button to release a bottle of Islay malt whisky - suspended at the front of the ship - to smash on to the hull. The whisky was from the Bowmore Distillery, the first distillery the Queen ever visited in an official capacity. 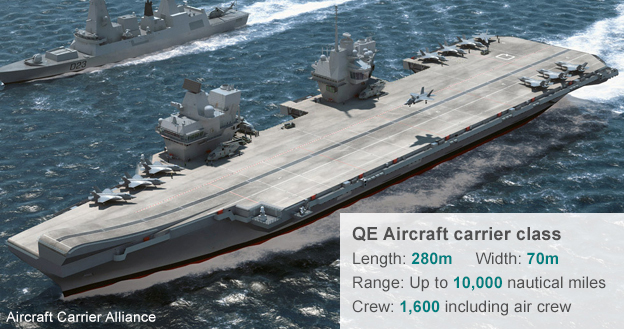 The naming ceremony, a naval tradition dating back thousands of years, marked the first time in more than 15 years that the Queen has christened a Royal Navy warship.
Six shipyards in the UK including Tyne, Rosyth and Appledore have been involved in building parts of the carrier.
More than 10,000 people at more than 100 companies have worked on HMS Queen Elizabeth, which has been beset by construction and design delays.
The estimated cost of the vessel and its sister ship is £6.2bn, well over the initial projected cost of £3.65bn.
The warship is as long as 25 buses and can carry 40 jets and helicopters at a time. It will have a permanent crew of almost 1,600 when it enters service in 2020.
Mr Booth described it as a "floating military city that can deploy aircraft, that can act as a disaster relief centre".
Jump media player
Media player help
Out of media player. Press enter to return or tab to continue.
The BBC's Jonathan Beale looks at how to land a fighter jet on a warship

Glenn Campbell, BBC Scotland political correspondent
It so happens that the Royal Navy has chosen to name and float its new aircraft carrier on American Independence Day.
Yet this ceremony signals the UK's intention to continue to independently project military power in the world for decades to come.
Albeit that the largest warship ever built in Britain will carry US-made fighter jets.
But one question that arises is: in whose name will HMS Queen Elizabeth and its air crews operate when they come into service in 2020?
Will it be the flagship of the UK as it currently exists or only for England, Wales and Northern Ireland if Scotland chooses its own independence in September's referendum?
The UK government argues that the union offers Scotland greater security as well as greater job prospects for thousands of Scottish defence workers.
The Scottish government believes NATO would guarantee an independent Scotland's defence and that shipyards such as Rosyth and Govan would continue to prosper by winning orders from both the UK and Scottish defence ministries.
The huge choice that Scotland faces looms large at the naming of a very big ship. 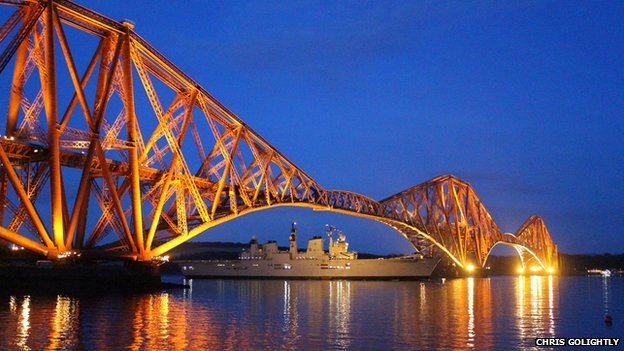 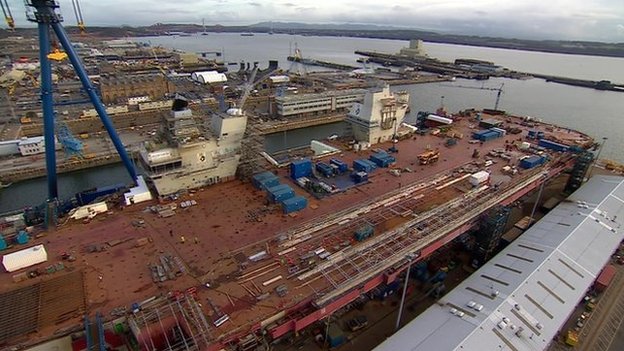 The aircraft carrier HMS Queen Elizabeth has been assembled in Rosyth
Firefighters had to be called to a fire on board the ship last month. It is believed that a small fire had started in one of the vessel's hull compartments.
Fire crews reported only minor damage.
at July 04, 2014