Previous Next
Jump media player
Media player help
Out of media player. Press enter to return or tab to continue.
Yolande Knell reports from Gaza City as residents flock to banks and shops during a temporary ceasefire
Continue reading the main story

Israel's foreign minister and Hamas have denied earlier reports of a truce deal to end fighting in Gaza between Israel and Palestinian militants.
Avigdor Lieberman said the reports were "as of now incorrect", and Hamas, which controls Gaza, said talks in Egypt were ongoing.
An Israeli official earlier told the BBC the truce was to take effect on Friday at 06:00 local time (03:00 GMT).
Some 227 Palestinians and one Israeli have died in nine days of conflict.
Israel launched its Operation Protective Edge with the stated objective of halting Palestinian rocket attacks on Israel.
However, the United Nations says most of those killed in Gaza have been civilians.
Israel accuses Hamas of hiding its military infrastructure within the civilian population.
On Wednesday, the UN Relief and Works Agency for Palestine refugees said it had found 20 rockets hidden in one of its vacant schools in Gaza and "strongly condemned" whichever group had placed them there.
Emergency relief
Egypt has been mediating in negotiations between Israel and Hamas.
Earlier reports said a new truce deal had been agreed by Israeli negotiators but that it had not yet been approved by the Israeli cabinet.

Analysis: BBC's Kevin Connolly in Jerusalem
In an off-the-record briefing in some of Thursday morning's overseas newspapers a senior Israeli military official is quoted as describing the likelihood of an Israeli ground operation in Gaza as "very high". The military logic is clear, as it always has been.
Israel's air force is steadily working its way down a long target list. But there are other targets that could only be reached by ground forces - better-concealed long-range rockets are one example.
Ground operations could mean anything from raids by units of Israel's Special Forces to an all-out invasion and occupation. That would mean Israeli casualties too - perhaps a lot of them - and give Israel responsibility for running Gaza even as it hunted and fought militants.
Lots of Israeli politicians want the army to go in, but so far PM Benjamin Netanyahu is hesitating. In the meantime, leaks suggesting a ground operation is "highly likely" are a psychological weapon in themselves.

However, Hamas spokesman Sami Abu Zuhri told Agence France-Presse: "The news about a ceasefire is incorrect. There are continuing efforts but no agreement until now."
Mr Lieberman told Israeli media: "The reports of a ceasefire are far from representing reality. I spoke with the prime minister, and as of now they are incorrect." 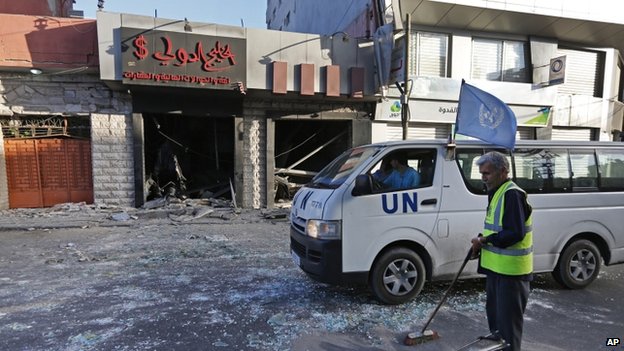 The UN said it used the brief ceasefire to distribute water, food and hygiene kits

A spokesman for Islamic Jihad, which is also involved in the talks, told the BBC the discussions in Cairo were "ongoing and intensive" and that Hamas and Islamic Jihad had asked for amendments to the Egyptian initiative, which the mediators were dealing with "positively".
A five-hour truce took place on Thursday between 10:00 and 15:00 local time.
It was requested by the UN and other international organisations to provide emergency relief and distribute water, food and hygiene kits.
However, a few minutes after the temporary ceasefire ended, the Israel Defense Forces said a rocket fired from Gaza had hit the town of Ashkelon.
It was followed by reports of further rocket attacks.
Jump media player
Media player help
Out of media player. Press enter to return or tab to continue.
Egyptian Foreign Minister Sameh Shoukry says efforts will continue to try to broker a ceasefire
Witnesses in Gaza say Israel has also carried out its first air strike since the temporary truce ended - on agricultural land near Beit Lahiya.
Gazans had tried to use the temporary truce to stock up on supplies. They queued outside banks and there were traffic jams.
Two hours into the truce, the Israeli military said that "Gazan terrorists" had fired mortars at the Eshkol regional council.
Israel responded with mortar fire, which, according to Hamas TV, hit near eastern Rafah in the south of the Gaza Strip.
Fighting had continued until the truce came into effect on Thursday morning.
Jump media player
Media player help
Out of media player. Press enter to return or tab to continue.
Are Israeli strike warnings effective? The BBC examines footage from both sides
Jump media player
Media player help
Out of media player. Press enter to return or tab to continue.
Shimon Peres: "We are really sorry to see four children being killed"
Palestinian medics said three people were killed by Israeli tank fire which hit a house in Rafah minutes before the ceasefire began.
The Israeli military earlier confirmed it had carried out dozens of air strikes on targets in Gaza since midnight, while Palestinian militants continued to fire rockets at Israeli cities.
Several of the rockets were intercepted by Israel's Iron Dome missile defence shield, with the rest striking without causing casualties.
The Israeli military also said it had thwarted the infiltration into Israel by 13 Hamas gunmen via a tunnel from southern Gaza towards the southern Israeli kibbutz of Sufa on Thursday morning.
Killings 'unintentional'
Meanwhile, Israeli President Shimon Peres has apologised for the deaths of four Palestinian children killed when Israeli artillery fire hit a beach near Gaza City on Wednesday. 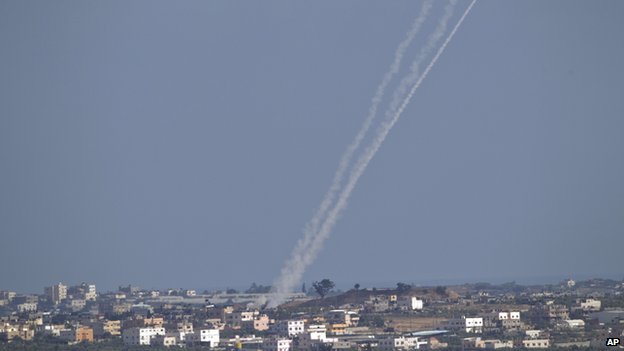 Israel says Palestinian militants have fired more than 1,380 rockets into Israel since 8 July 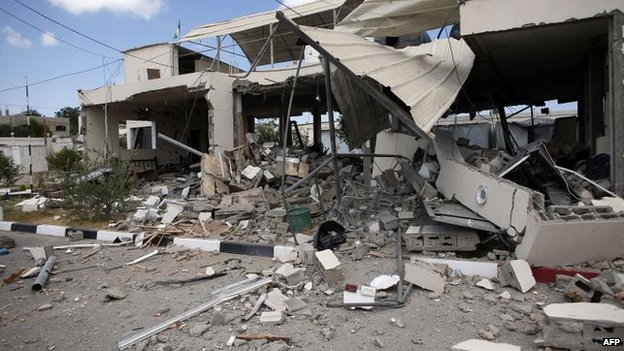 A building in Beit Hanoun, in northern Gaza, takes a hit from an earlier Israeli air strike
"I think it was unintentional and we are really sorry to see four children being killed," he said in an interview with the BBC.
He said an evacuation warning had been issued ahead of the air strike, which was targeting "a great concentration of weapons" in the area.
The Israeli military said it was "carefully investigating" the incident, adding that "based on preliminary results, the target of this strike was Hamas terrorist operatives".
Israel says it has carried out more than 1,960 attacks on Gaza since 8 July, while militants have fired some 1,380 rockets at Israel.
The Israeli military has mobilised tens of thousands of troops on the border with Gaza amid speculation that a ground invasion could be launched.
The UN says at least 1,370 homes have been destroyed in Gaza and more than 18,000 people displaced in recent hostilities.