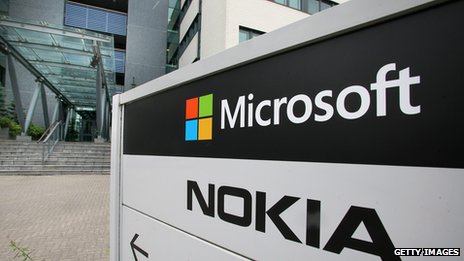 Microsoft is to cut up to 18,000 jobs marking the deepest cuts in the technology firm's 39-year history.
The bulk of the cuts, around 12,500, will be in its phone unit Nokia, which Microsoft bought in April, the firm said.
Microsoft pledged to cut $600m (£350.8m) per year in costs within 18 months of closing the acquisition.
The cuts are much more severe than the 6,000 initially expected.
The firm employs 127,000 globally, including 3,500 staff in the UK.
Microsoft declined to say how many jobs in the UK would be cut as a result of the changes.
Chief executive officer Satya Nadella, who took the helm in February, wants the firm to shift its focus away from software to online services, apps and devices.
"Making these decisions to change are difficult, but necessary," Mr Nadella wrote in the announcement to staff.
The firm said it also planned to have fewer layers of management "to accelerate the flow of information and decision making."
Microsoft said staff affected by the job cuts would be notified over the next six months, and they would be "fully completed" by the the end of June next year.
In total it said the cuts, including severance pay, would cost it between $1.1bn to $1.6bn (£643m to £935m) over the next year.

Satya Nadella has only held the reins at Microsoft for five months, but the Nietzsche-quoting chief executive is determined to shake-up the once dominant firm.
Microsoft's software, which used to be the outright leader in personal computing, is now only used on 14% of devices, if you take into account smartphones and tablets.
Adapting to what Mr Nadella calls a "mobile-first, cloud-first" world was the driving force behind Microsoft's $7.2bn acquisition of Nokia's mobile handset division last year, and the job cuts announced on Thursday, many of which involve Nokia departments, are designed to "simplify" this process.
The tech industry, Mr Nadella said in an email to employees last week, "does not respect tradition, it only respects innovation," and his hope is that a focus on productivity tools such as Skype and personal assistant Cortana will bring back this said respect.
Perhaps it will, but not, it seems, without casualties.
at July 17, 2014