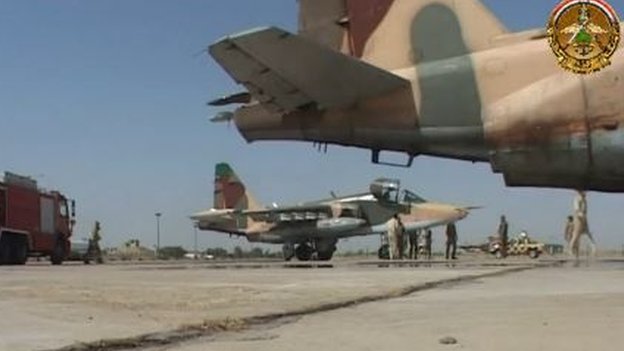 Iran has supplied Iraq with attack jets to help it counter an offensive by Sunni rebels led by the Islamist group Isis, strong evidence suggests.
Russia supplied an initial delivery of the aircraft just a few days ago.
But analysts at the International Institute for Strategic Studies (IISS) in London say that a further delivery, on 1 July, originates from Iran.
This means that the US - which has also sent aircraft to Iraq - is operating alongside Iran in this conflict.
The US has deployed drones and helicopters to Iraq and is actively gathering intelligence on the advance by the Islamic State in Iraq and the Levant (Isis). Washington is also supplying Iraq's existing air force with Hellfire missiles.
In this case adversity has made for strange bed-fellows.

Mr Dempsey of the IISS notes that "the camouflage scheme visible on the three aircraft is also identical to that currently applied to Iranian Su-25s; a scheme not adopted by any other operators.” He says there appear to have been attempts to conceal the original markings "with evidence of key positions being painted over. This includes the location of Iranian roundels on the side of the air intakes along with a large proportion of the tail fin normally occupied by a full serial number, the Iranian flag and the IRGC insignia."
Joseph Dempsey, an analyst for the IISS's Military Balance publication, has carefully studied video of the aircraft released by the Iraqi authorities.
He told the BBC that he believes that some of the aircraft - Sukhoi Su-25 "Frogfoot" ground attack jets - operating in Iraq are indeed Iranian.
"Imagery analysis," he says, "makes this the most logical conclusion. The markings, serial numbers and camouflage all fit with what we know of the Iranian fleet."
Iran maintains a small number of Su-25 aircraft, operated by the Iranian Revolutionary Guard Corps (IRGC).
Ironically, the majority of these aircraft used to be part of the Iraqi Air Force - seven Su-25s sought refuge in Iran during the First Gulf War.
Contrary to Iraqi wishes, these aircraft were retained and later brought into Iranian service.
Of course it is much harder to determine who is actually flying the aircraft.
Mr Dempsey says that "while Iraq may retain some capability, having operated the aircraft in the past, any pilots would not have had any flying experience for at least 11 years.
"So it would strongly suggest that some level of external support is required," he says.
at July 02, 2014