Apple has unveiled a smartwatch - the Apple Watch - its first new product line since the first iPad and the death of its co-founder Steve Jobs.
The device runs apps, acts as a health and fitness tracker and communicates with the iPhone.
While rival smartwatches already exist, experts said Apple had a history of entering sectors relatively late and then changing their direction.
Apple also unveiled two new handsets that are larger than previous models.
The iPhone 6's screen measures 4.7in (11.9cm) and the iPhone 6 Plus's 5.5in (14.0cm) - a change that analysts said should help prevent users migrating to Android.
It also announced a new service called Apple Pay, which chief executive Tim Cook said he hoped would "replace the wallet" in shops. 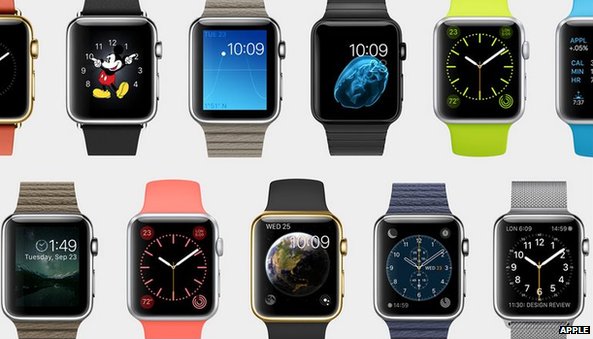 The Apple Watch offers 11 different watch faces and allows the owner to change its straps
Watch apps The Apple Watch comes in two sizes and is controlled by what Apple calls a "digital crown" - a dial on its side that allows content on its screen to be magnified or scrolled through, and can also be pressed inwards to act as a home button. 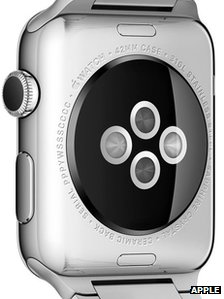 The watch's rear features LEDs and sensors to detect the user's heart rate
The display is a touchscreen that can detect the difference between a light tap and heavier pressure from the user's fingers. In addition, the device runs Siri - Apple's voice-controlled "personal assistant".
It offers a variety of different watch faces, can alert the user to notifications, act as a heart rate monitor and show maps.
Apple said that apps could be processed on an iPhone, but displayed on the watch in order to extend battery life. It did not say how often the device needed to be recharged.
Although some of these features are available from competing products, one observer said the device had the potential to ignite the wearable tech sector.
"I'm sure that for many people, waiting to see what Apple did was a first step before going out and buy a wearable technology product, whether or not it's an Apple one they get," said Tim Coulling, senior analyst at research firm Canalys.
Motorola's president, Rick Osterloh, told the BBC last week that he welcomed the idea of Apple "growing" the smartwatch market, even though it would compete with his own product, the Moto 360.

Jump media player
Media player help
Out of media player. Press enter to return or tab to continue.
WATCH: Rory Cellan-Jones asks if Apple Watch can convert a sceptical public to wearable technology
Mr Coulling added that other rivals probably felt likewise.
"The buzz that Apple's entry will generate about wearables is unquestionable," he explained. 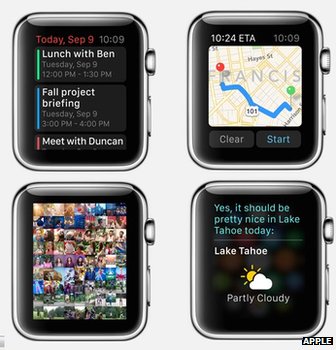 Apple has redesigned several of its apps to fit onto the Watch's smaller screen
"It has a huge marketing budget and uses slick advertisers, so its launch will generate interest around the whole product segment."
The watch - which comes in three different editions - relies on its user owning an iPhone 5 or more recent model.
It will cost $349 (£216) - which is more than recently announced Android Wear watches from Motorola, Sony and others - and will not be available until "early 2015".
Bigger phones While Apple Watch was the most anticipated product, the company's new handsets are likely to be its biggest earners.
Apple saw its global share of smartphone shipments slip from 13% to 11.7% between the second quarters of 2013 and 2014, according to research firm IDC, while Android's share grew.
"The main benefit for Apple in going to a larger size of screen is not so much to woo people over to its devices, but to prevent its customers defecting, particularly to devices such as Samsung's Galaxy Note," said John Delaney, head of IDC's European mobility team. 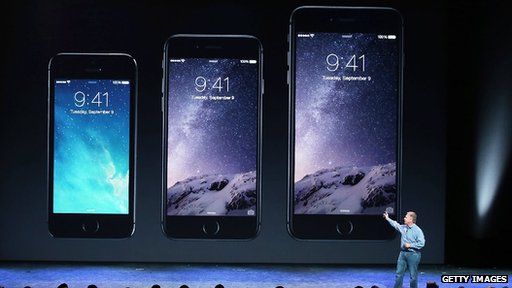 The new iPhones are bigger and thinner than the previous version
"But one should bear in mind that Apple's decline is relative - the smartphone market has expanded, and most of the expansion has taken place in the lower price bracket that Apple doesn't address."
Apple had previously justified the 3.5in and 4in screen sizes of its existing iPhones as being suited to one-handed use. In 2010, the company's co-founder Steve Jobs went so far as to say "no-one's going to buy" a phone that they could not get a single hand around.
But one expert said a market had developed for so-called phablets.
"Watching video is definitely something that appeals on a bigger display, as well as gaming. And for business customers, having more space to do emails properly and look at and edit presentations helps," said Carolina Milanesi, chief of research at Kantar Worldpanel ComTech.
SMARTPHONE SALES BETWEEN JANUARY AND JULY 2014:
Apple said that the A8 chip featured in the new phones would provide 25% faster compute performance than before.
The improved resolutions - dubbed "retina HD" - mean that the iPhone 6 offers 326 pixels per inch and the iPhone 6 Plus 401ppi. While better than before, the resolutions are still beaten in terms of raw numbers by Samsung's flagships - the Galaxy S5 and Galaxy Note 4 - and the HTC One.
New sensors include a barometer, which Apple said would help fitness apps distinguish whether the owner was running up a mountain or along a flatter surface.
The M8 co-processor can now estimate distances as well, which should also help provide more accurate readings.
The handsets will be available for sale on 19 September.

Apple has previously waited for others to pioneer new tech before leapfrogging the competition as the graphic below illustrates:
Continue reading the main story
INTERACTIVE 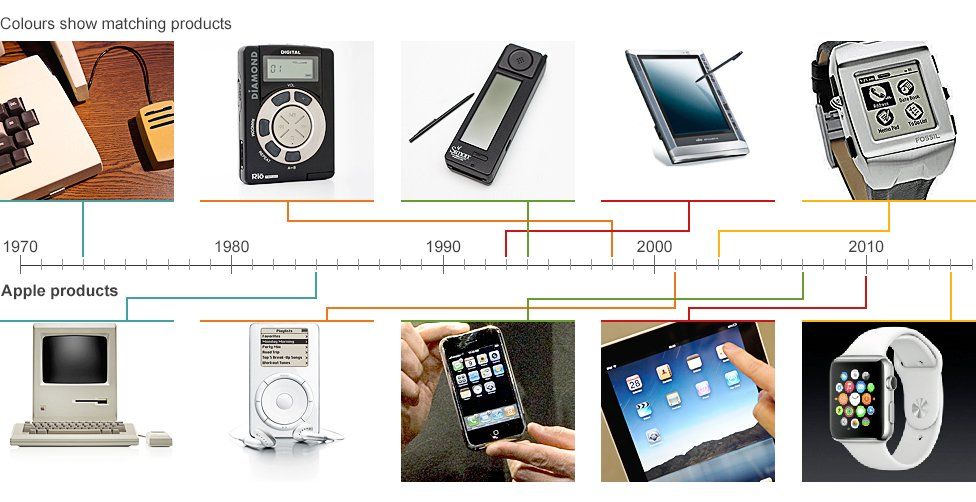 Apple Pay
The Apple Pay service depends on an NFC (near field communication) chip featured in both the new phones and watch. 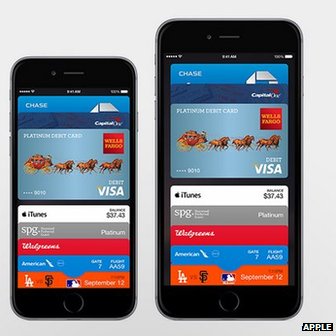 Apple said that US McDonald's restaurants, Whole Foods stores and Walgreens pharmacies would accept Apple Pay
Apple described the service as being "secure" because it worked without Apple needing to store the credit card details itself, or the user having to share their name and card details with the cashier.
iPhone owners will be able to use it by waving their handset above an NFC reader at a shop's till.
Several other firms have tried to pioneer touchless payments, but they have yet to become popular beyond credit and debit cards that include the feature.
"We've been waiting a long time for Apple to get into contactless payments, and its solution is characteristically straightforward for ordinary people," commented Jason Jenkins, director of content at the news site Cnet.
"But with contactless so common in Britain, I have to wonder if Apple has missed the boat here - waving a credit card at a payment reader is hardly a challenge."
Apple's shares spiked higher during the press conference, but ultimately closed 0.4% down on the day.

The highlight of the event was undoubtedly Apple Watch, where the tech giant's signature hallmarks of elegance and simplicity are in evidence.
It is certainly a bold move to overhaul the user interface and use a "digital crown"; in terms of functionality it appears extremely comprehensive, although at $349 for the basic version - around 30%more than its Android rivals - it needs to be.
The nuances of its fitness tracking capabilities elevate it beyond the competition, though some features like "digital touch" to send bespoke messages and gestures to friends feel a bit gimmicky.
The square design may be a little too futuristic-looking for timepiece traditionalists, although making the watch in two sizes is a smart move which will broaden its appeal to women.
It is little surprise that Apple Watch supports Apple Pay, the new payment mechanism. By taking a cut from real-world and non-Apple online transactions, Apple Pay has the potential to be a hugely powerful revenue generator.
It is undoubtedly convenient - especially when used in conjunction with Apple Watch - but after the recent celebrity photo hacks, confidence in Apple's security is dented - and it will take time before many smaller retailers are on board.
at September 09, 2014