Jump media player
Media player help
Out of media player. Press enter to return or tab to continue.
Nasa Administrator Charles Bolden: "This is the most ambitious and exciting chapter in the history of Nasa"
Continue reading the main story

The US space agency Nasa has picked the companies it hopes can take the country's astronauts back into space.
It is awarding up $6.2bn to the Boeing and SpaceX firms, to help them finish the development of new crew capsules.
Since the space shuttles were retired in 2011, the Americans have relied on Russia and its Soyuz vehicles to get to the International Space Station.
Boeing and SpaceX should have their seven-person crew ships ready to take over the role by late 2017.
Disagreements over Moscow's actions in Ukraine have made the current Soyuz arrangement increasingly unpalatable for Washington.
So has the price per flight now being charged - at $70m (£43m) per US astronaut seat. American officials regard this as excessive.
The Obama administration charged Nasa in 2010 with the job of "seeding" indigenous, competing companies to restore American capability.
Continue reading the main story

Kathy LeudersCommercial crew programme manager
Since then, the agency has released nearly $1.5bn in funding, with most of this money going to Boeing in Texas, California's SpaceX and a third firm - the Colorado-based Sierra Nevada Corporation (SNC).
Ideally, the agency would have liked to continue funding all three into the final phase of its commercial crew programme, but its budget is too stretched.
It has meant Nasa having to pick favourites.
The Boeing Corporation is going to receive a fixed-price Commercial Crew Integrated Capability (CCtCap) contract worth up to $4.2bn.
SpaceX will get a contract for a lesser amount - $2.6bn.
Both companies must meet specified technical milestones to pick up what will be staged payments.
"From day one, the Obama administration has made it clear that the greatest nation on Earth should not be dependent on other nations to get into space," Nasa Administrator Charlie Bolden told reporters.
"Thanks to the leadership of President Obama and the hard work of our Nasa and industry teams, today we are one step closer to launching our astronauts from US soil on American spacecraft and ending the nation's sole reliance on Russia by 2017." 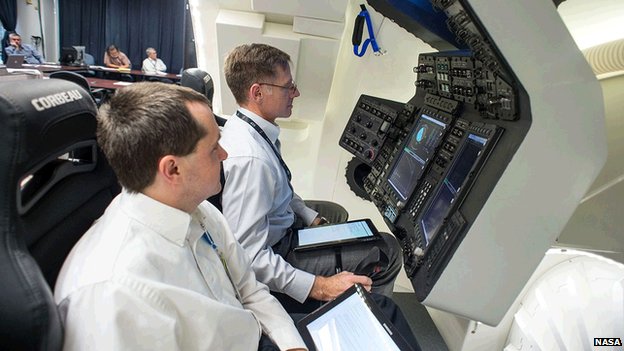 The very last shuttle commander, Chris Fergusson, is now part of Boeing's CST-100 team
For Boeing, the new money should take its CST-100 capsule through final development and safety certification.
Part of the contract also includes fees for initial crewed flights, up to a maximum of six.
The CST-100 is designed to launch into orbit atop an Atlas V rocket from Cape Canaveral, Florida, and return to Earth with the assistance of a heat shield and parachutes to a land location.
Superficially, there are similarities with the Apollo system, but the new Boeing ship's technologies are, of course, all state-of-the-art.
Many people thought SpaceX might grab a larger tranche of the funding on offer.
It already operates a rocket and capsule system in an unmanned configuration to take cargo to the ISS, and was working to upgrade the design to accommodate the more stringent assurance levels demanded of human spaceflight.
But SpaceX is unlikely to be deterred by getting second billing. It is committed to completing development of its man-rated Dragon capsule.
And it believes that its system will eventually turn out to be much cheaper than the one coming from the more well-established Boeing Corporation.
This could put the California company in a very strong position to win commercial launch contracts further down the road.
The $2.6bn CCtCap contact it is due to receive also covers a certification process and initial crewed missions - again, up to six. 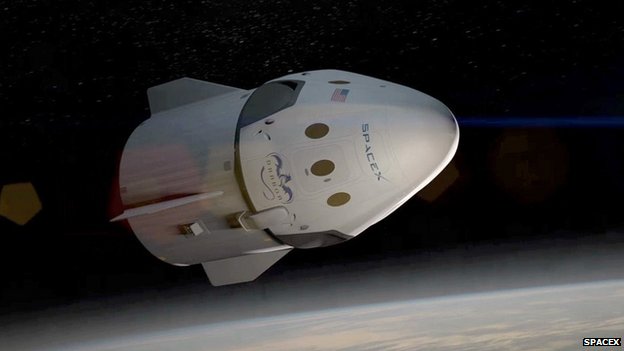 SpaceX is upgrading its unmanned cargo ship to carry humans
In news conferences held by Nasa to announce the awards, reporters repeatedly pressed agency officials to explain why the sum offered to Boeing was so much larger than the one to SpaceX.
Those officials declined, stating the procurement process was continuing and that it would be inappropriate at this stage to discuss such matters.
But Kathy Leuders, the manager for the commercial crew programme, remarked: "The companies proposed the value within which they were able to do the work and the government accepted that."
The big loser in this final round of Nasa's commercial crew programme is the Sierra Nevada Corporation. It will get no CCtCap support.
But SNC has repeatedly said that its vision is not a hostage to Nasa patronage.
It has already booked a rocket to launch an unmanned demonstration flight of its proposed crew vehicle, which stands out for not being a conical capsule.
Known as the Dream Chaser, this ship looks like a mini space shuttle. And just like the famous winged orbiters, it would glide back to Earth to land on a runway.
SNC has spent a lot of time building partnerships with other companies and with foreign space agencies. 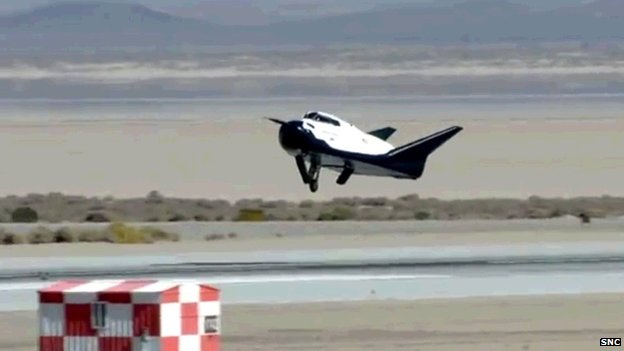 SNC's Dream Chaser is different in that it is a winged vehicle. It has more in common with the old shuttles
at September 16, 2014