Katherine Hooper jumped to death on Dartmoor with son 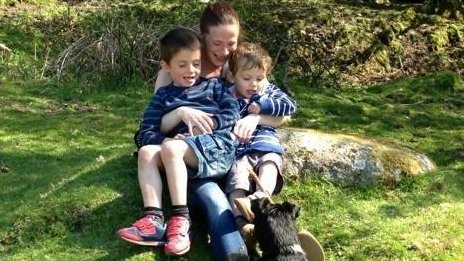 Katherine Hooper with Joshua, who died in the fall, and Samuel who was found dead at the family home
Continue reading the main story

A woman jumped to her death from rocks at Dartmoor with her five-year-old son, an inquest has heard.
Katherine Hooper, 24, and Joshua Patterson died after falling 80ft (24m) at Haytor in July 2013.
Ms Hooper's son Samuel, two, was later found dead, possibly drowned, at her home in Paignton.
The coroner at the inquest held in Torquay said Ms Hooper took her own life, Joshua was unlawfully killed and recorded an open verdict on Samuel.
Pathologists have been unable to establish the cause of Samuel's death, despite a post-mortem examination.
The boys' father, Neil Patterson, who was estranged from Ms Hooper, said in a statement after the inquest that he believed she had found Samuel drowned in the bath.
He said it would have been an "unimaginable sight" and she would have feared losing Joshua to social services and being arrested over the death.
"Katherine must have been in the darkest hole imaginable," he said.
Mr Patterson had been charged with attacking Ms Hooper in April 2013, but the charges were dropped after her death.
A Serious Case Review is under way to examine whether the family had been failed after it emerged they were known to social services and other agencies.