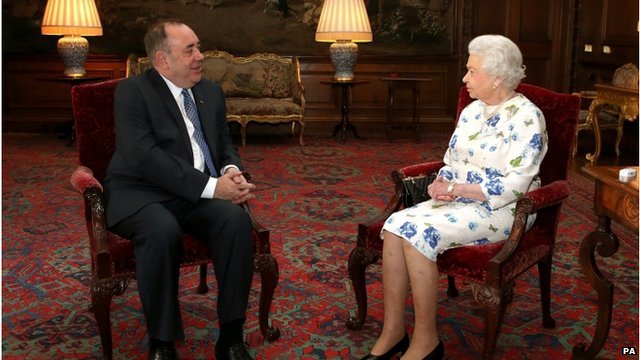 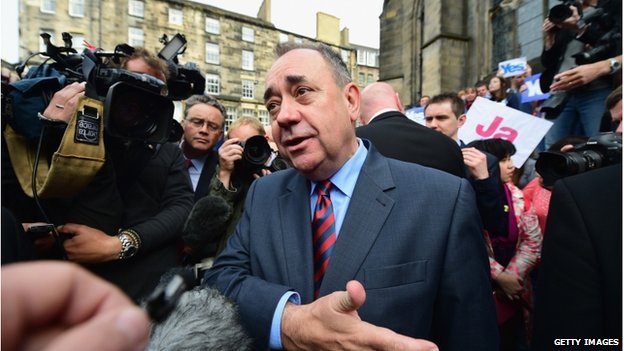 Alex Salmond was speaking outside St Giles Cathedral in Edinburgh
Under the plans for independence outlined in the Scottish government's white paper, the Queen would remain head of state.
It says: "On independence Scotland will be a constitutional monarchy, continuing the Union of the Crowns that dates back to 1603, pre-dating the Union of the Parliaments by over one hundred years. On independence in 2016, Her Majesty The Queen will be head of state."
Queen's Speech In this year's Queen's Speech at the state opening of the Westminster Parliament in June, Her Majesty said her government would proceed with plans to enhance the financial powers of the Scottish Parliament and would continue to "make the case for Scotland to remain a part of the United Kingdom".
Though the speech is delivered by the Queen, the content is written by the UK government of the day.
However, there is a precedent for the Queen commenting on a major issue that has constitutional implications.
In 1977, on the occasion of her Silver Jubilee, she informed both Houses of Parliament: "I cannot forget that I was crowned Queen of the United Kingdom of Great Britain and Northern Ireland."
The comments were widely interpreted as a royal rebuff to proposals for devolution to Scotland which foundered in 1979.
An address to the Scottish Parliament in 2002 was seen as a move away from the 1977 position.
Her Majesty warmly praised the relatively new devolved settlement, noting that MSPs were helping, with their work, to "strengthen the bonds that link the nations and regions of the United Kingdom, the Commonwealth and Europe".
at September 09, 2014