Out of media player. Press enter to return or tab to continue.
The BBC's Reda El Mawy reports from the last checkpoint before the besieged Iraqi town of Amerli
Continue reading the main story

Iraqi forces have reached the besieged town of Amerli in northern Iraq, where thousands have been trapped by jihadists, military officials say.
The apparent breakthrough came amid fresh US air strikes on Islamic State (IS) positions. Fifteen IS fighters are said to have been captured.
The UK, France and Australia joined the US in dropping humanitarian aid.
Some 15,000 minority Shia Turkmen in Amerli have been surrounded by Islamic State militants for two months.
Military sources told the BBC's Jim Muir, who is a few miles from Amerli, that the Iraqi Army and volunteer militia entered the town on Sunday and had broken the siege.
However Amerli remains dangerous because of roadside bombs left behind by IS militants, our correspondent says.

No-one here seems to be in any doubt that the combination of forces backed up by Iraqi government air power has in fact broken the siege.
There is a lot of celebration here, including gunfire. We cannot go into the town yet as the Islamists have left lots of booby traps and bombs.
The situation inside is said to be dire because Amerli has been cut off for two months.
However, what we're told from recent figures is that the number of civilians there is much fewer than thought. We were told 15-16,000, but now perhaps 2,500 remain. Many of those are now fighters, having taken up arms.
So there might not be as many desperately needy people as first thought.

The US military confirmed it had carried out two further air strikes on Sunday. One was near the Mosul Dam and had destroyed an IS armed vehicle. The other was near Amerli, where an IS tank was damaged.
The strikes brought the overall total by US Central Command across Iraq to 120.
Earlier, Australian Prime Minister Tony Abbott announced that his government would join other Western countries in arming the Kurds - sending rocket-propelled grenades, mortars and assault rifle ammunition.
"None of us want to get involved in another Middle Eastern war, but it is important to do what reasonably can be done to avert potential genocide," Mr Abbott said.
Massacre fears

The operation to reach Amerli began on Saturday when an alliance of Iraq government forces, Shia militias and Kurdish Peshmerga began a two-front attack on IS positions.
US and Iraqi planes provided air cover overnight. 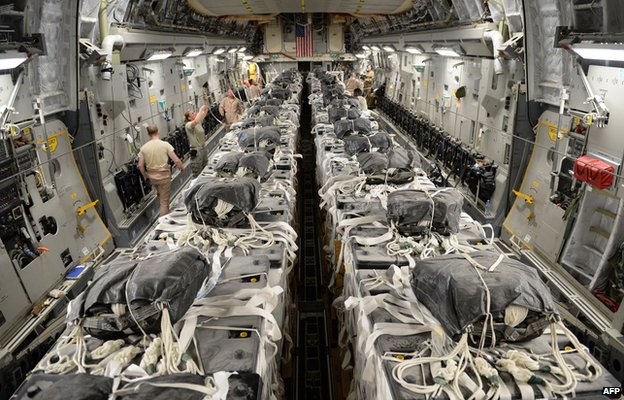 Residents of Amerli have been cut off by jihadi militants from receiving food, water and medical supplies 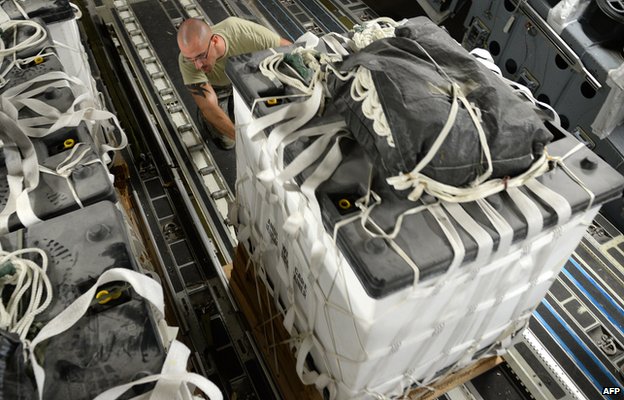 Aid packages from the US included around 10,500 gallons of drinking water and around 7,000 meals 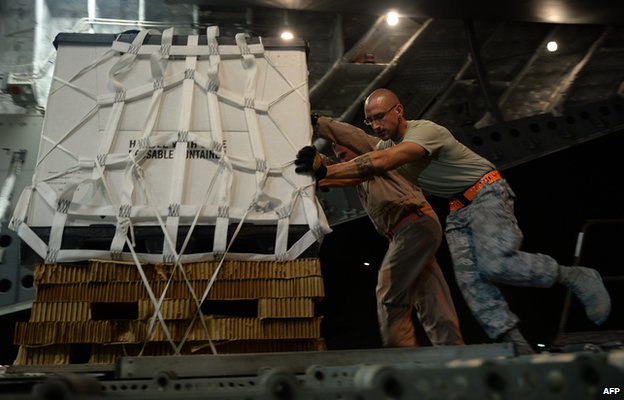 The US has been supporting Iraqi forces with air strikes on jihadis, as well as in the humanitarian effort
Reports described it as the biggest military operation since IS began making major gains in Iraq in June.
"Security forces and militia fighters are inside Amerli now after breaking the siege and that will definitely relieve the suffering of residents," Adel al-Bayati, mayor of Amerli, told Reuters.
One resident of Amerli, Amir Ismael, told Reuters by phone: "I can see the tanks of the Iraqi army patrolling Amerli's street now. I'm very happy we got rid of the Islamic State terrorists who were threatening to slaughter us."
The UN had expressed fears there could be a massacre if IS took the town, which lies in Kurdish-controlled Iraq.
IS has been accused of atrocities in areas of Iraq and Syria under its control.
The jihadists see the Shia Turkmen in Amerli as apostates. 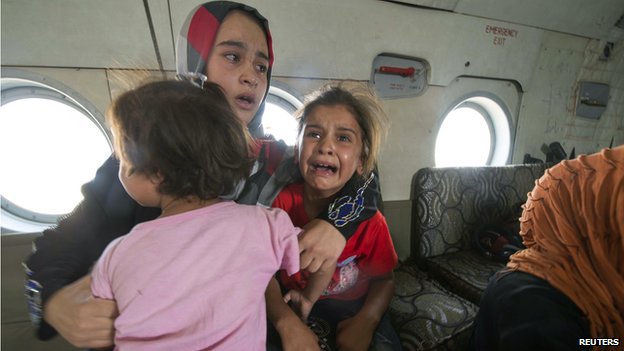 A lucky few residents were able to escape from Amerli a few days earlier, evacuated in Iraqi military helicopters
Islamic State has seized large swathes of territory in Iraq and Syria in recent months, including Iraq's second city, Mosul.
Pledging allegiance to their leader, Abu Bakr al-Baghdadi, the jihadists have imposed a harsh form of Islamic rule in areas under their control.
The group has declared a new caliphate, or Islamic state ruled by a religious leader, and Abu Bakr al-Baghdadi has announced himself as caliph.
The IS ideology has attracted would-be jihadists from a number of Western nations, including the UK, and has spread its message aggressively on social media, often posting gruesome pictures of beheadings and mass killings.
The group responded to the US beginning air strikes against it by killing the American journalist James Foley. 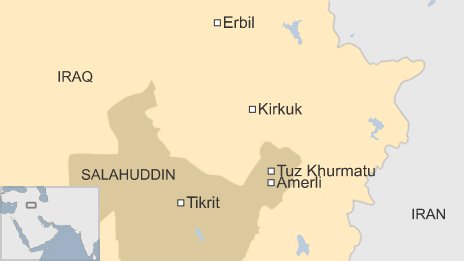 Are you in Amerli? Would you be happy to speak to a BBC journalist about the situation there? You can email your experiences tohaveyoursay@bbc.co
at September 01, 2014