Jump media player
Media player help
Out of media player. Press enter to return or tab to continue.
Several streets surrounding the court were cordoned off by police
Continue reading the main story

The deadly shooting at a court building in Copenhagen was the result of "a family dispute", Danish police say.
One person was shot dead and another wounded when a man reportedly opened fire inside the bailiff's court in the city centre.
According to witnesses, five or six shots were fired. A man was later arrested and a sawn-off shotgun recovered at the scene.
The Danish judges' association is urging action to improve security.
A preliminary custody hearing was taking place in the court when the shooting broke out at about 10:00 (08:00 GMT) Danish media reported. 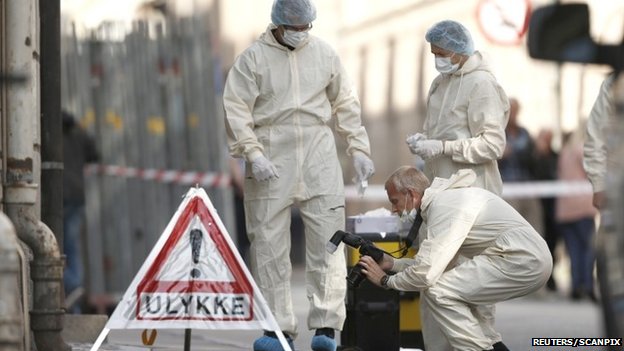 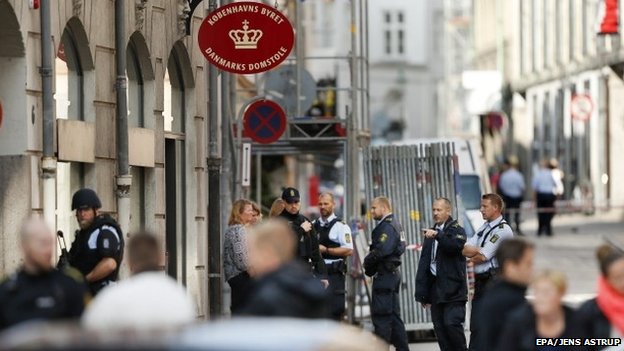 The suspect reportedly fled from the scene but was caught and arrested by armed police near City Hall
Danish police told the BBC's Malcolm Brabant that the suspect is the maternal grandfather of the child involved in the case.
The 31-year-old father of the child was shot and critically injured, and his 57-year-old lawyer was killed, they said.
"It is a family tragedy, not an attack on the court or the legal system," said Soeren Axelsen, who runs the Copenhagen City Court.
Both victims were shot inside the court, which handles family-related cases as well as debts and bankruptcy, the official said.
The first reportedly died at the scene and the second was taken to hospital with life-threatening injuries.
One witness told reporters that the gunman fled the court and was later arrested in a street beside the city hall.
The judges' association told our correspondent they were alarmed that the man managed to smuggle the weapon into the building, and had been warning about this type of security incident for years.
at September 16, 2014