Female student hit by a stray bullet in Migori

Ramenya Gibendi 4 hours ago 19130
– Prison warders are said to have been after an inmate who escaped from Migori GK prison
– The inmate then entered a nearby secondary school that is hosting regional ball games with many students in attendance
– A female student was shot in the process by a bullet apparently targeted at the inmate
A prison warder  in Migori shot a female student on Friday,May 27, in a school compound where they were chasing after an escaped inmate.
READ ALSO: New twist as postmortem shows police killed CORD protester (photos)
The warder is said to have opened fire at the inmate within Migori Boys High School and apparently hit the student by mistake. 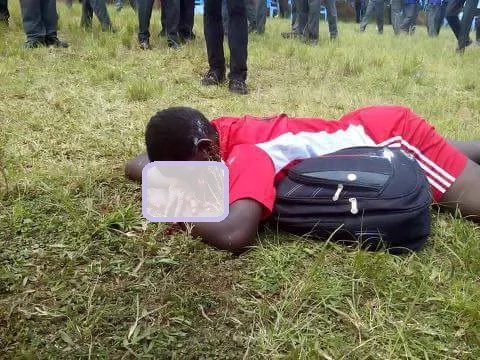 The female student from St. Albert  Ulanda Girls Secondary School that is said to have been hit by a stray bullet as police chased after an escaped inmate. Photo:Collins Okello/Facebook
The student is said to have been rushed to Tenwek hospital in Migori in critical condition.
Migori Boys High School is currently hosting secondary schools regional ball games with many schools in attendance and perhaps the inmate wanted to disappear into the crowd.
READ ALSO: Jubilee responds to CORD after suspending anti-IEBC demos
Protests rocked Migori town following the incident as students who participating in the secondary schools ball games at Migori boys protested the action taken by the warder.
This comes at a time the police service is facing multiple accusations for killing innocent civilians especially on the back of three deaths from the recent CORD  anti-IEBC demos
at May 27, 2016