Getting behind Israeli 'frankness' 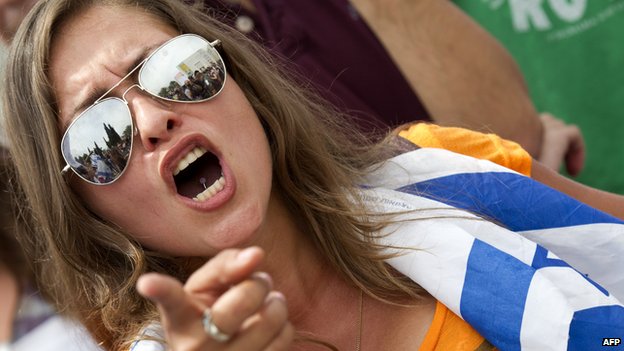 Israelis have a reputation for straight-talking, a quality that visitors are not always prepared for. But what lies behind it?
There's an old joke in which a reporter says to an Israeli, a Russian and an American, "Excuse me, can I get your opinion on the food shortage in Africa?"
The Russian says: "What's an opinion?" The American says: "What's a shortage?" and the Israeli says: "What's 'Excuse me'?"
Now, of course before anyone accuses me of stereotyping, I realise the punchline will work with pretty much any nationality.
But, on a recent reporting trip to Israel, I did encounter that special trait for which Israelis have gained a bit of a reputation - a certain, shall we say, straightforwardness, a brusqueness of manner, so familiar to frequent visitors to Israel that they treat it as a source of humour.
In fact, there were daily encounters - from the taxi driver who argued with me over where I wanted to go, to the hotel receptionist who insisted it was my own incompetence rather than a defective key which was stopping me opening my door, to the museum official who questioned why I asked permission to take a photograph, saying: "Just take. Why bother asking when we might say 'No'?" 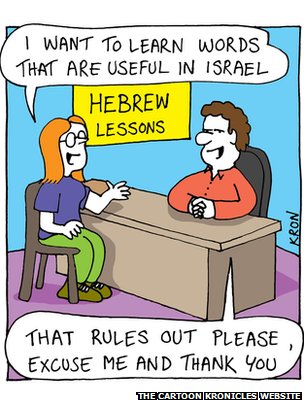 Not to mention being barked at ("Wodyawant?") by a stony-faced girl serving ice-cream at a parlour in Jerusalem, after having been queue-jumped by an elderly Israeli unimpressed by my patient waiting.
Now again, I know that queue-jumping happens everywhere, and the ice-cream girl might have just been having an off day, and that none of these incidents prove a thing, but it did get me thinking. Was all this really impoliteness, or a cultural misunderstanding, or something more deep-rooted?
To try to shed some light on it, I asked Professor Shalom Schwarz, a social psychologist at the Hebrew University of Jerusalem.
"There's certainly something of a tendency to be direct, and it's more common in Israel than in many other places. Most Israelis are aware of this reputation," he says.
Could politeness have become diminished by the blending of so many different cultures in Israeli society?
Schwarz doesn't think so, and has an alternative theory.
"There's a very strong pragmatic strain here and that's helped along by being direct and not wasting time and effort on niceties - that may partly stem from army culture, which many people have come through, where you're expected to be straightforward and focus on the task."
He also suggests that what might seem like poor social graces to outsiders might actually help explain Israel's remarkable achievements.
After all, the country is an economic success story, a powerhouse of technological innovation and a world leader in medical and scientific research.
"It could be that, say, in business relationships, what some perceive as rude actually contributes to something - in the sense that there is somewhat less concern if you have something to say and say it in a straightforward manner. Then ideas can get out more in a more straightforward way," says Schwarz.
There is little doubt Israelis' penchant for directness is partly a product of living amid the harsh realities of the Middle East.
Continue reading the main story

They even have a word for it in Hebrew - "dugri", which roughly translates as "frank" or "down to earth". It's also an Arabic word meaning "straight" or "straight ahead". It was used famously by Israeli Prime Minister Benjamin Netanyahu who told Palestinian leader Mahmoud Abbas at the UN that only by talking "dugri" could they achieve peace.
After that, Israelis liked the phrase so much, they started to wear it on T-shirts.
But Israelis are not really deserving of their reputation for bluntness, says one of the country's leading image gurus, Tami Lancut Leibovitz.
Leibovitz, who's coached Israeli executives and politicians in the art of etiquette for 30 years, says her compatriots are a sensitive people who have just developed a thick skin.
Her analysis chimes with another Hebrew word, "sabra", slang for a native Israeli. It comes from the name of a cactus fruit - prickly on the outside but tender within - characteristics which perhaps define Israelis best.
at April 13, 2013