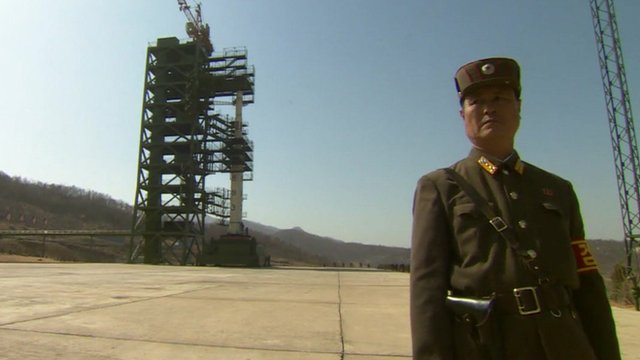 China is North Korea's only ally, with significant economic leverage at its disposal
Continue reading the main story

US Secretary of State John Kerry is in China, for a visit he has said he will use to urge Beijing to use its influence to rein in North Korea.
Mr Kerry's four-day tour of Asia comes amid speculation that North Korea is preparing for a missile launch.
In South Korea on Friday, he said that a policy of denuclearisation shared by the US and China had to have "teeth".
The US says there is no evidence North Korea can fire a nuclear warhead as suggested by a leaked US report.
North Korea has reportedly moved at least two Musudan ballistic missiles to its east coast.
A flurry of warlike statements from Pyongyang has prompted speculation that it might launch a missile - possibly on 15 April, when the country marks the 101st birthday of the nation's founder and former leader, Kim Il-sung.
Continue reading the main story

Kim GhattasBBC News, Seoul
Since the UN imposed fresh sanctions on North Korea in February, its leadership has promised to restart a mothballed nuclear reactor, has shut an emergency military hotline to South Korea, and has urged diplomatic staff to leave, saying it cannot guarantee their safety.
The North says it has also been angered by joint US-South Korean military exercises.
Though North Korean rhetoric has been more bellicose than usual, analysts say it fits a long-standing pattern, and may be intended to boost the popularity of Kim Jong-un, who came to power last year.
'Defuse this tension'
Mr Kerry arrived in Beijing on Saturday and is holding talks with his counterpart, Wang Yi, as well as China's Premier Li Keqiang and President Xi Jinping.
Mr Kerry told Mr Xi the world was facing "a critical time with some very challenging issues", among them Korean tensions but also "the challenge of Iran and nuclear weapons, Syria and the Middle East, and economies around the world that are in need of a boost".
On Friday, during a visit to the South Korean capital, Seoul, Mr Kerry said the US would protect itself and its allies, and that his talks in Beijing would aim to "lay out a path that will defuse this tension".
Continue reading the main story

"I think it's clear to everybody in the world that no country in the world has as close a relationship or as significant an impact on [North Korea] than China," he said.
China, like the US, wanted denuclearisation, he said, adding: "If that's your policy, you've got to put some teeth into it."
The BBC's John Sudworth, reporting from Seoul, says Mr Kerry is likely to tell Chinese leaders that unless they do more to rein in North Korea, the US will be obliged to keep on focussing strategically on the region - something that makes China nervous.
But correspondents say that it is unclear whether Beijing has the political will to do so, and that while Beijing is growing increasingly frustrated with Pyongyang, it is likely to continue supporting the status quo, rather than risk creating instability across its border.
Mr Kerry warned North Korean against any launch, saying to do so would "be choosing wilfully to ignore the entire international community" and a "provocation and unwanted act".
He warned Mr Kim a launch would "further isolate his country and further isolate his people, who frankly are desperate for food, not missile launches." 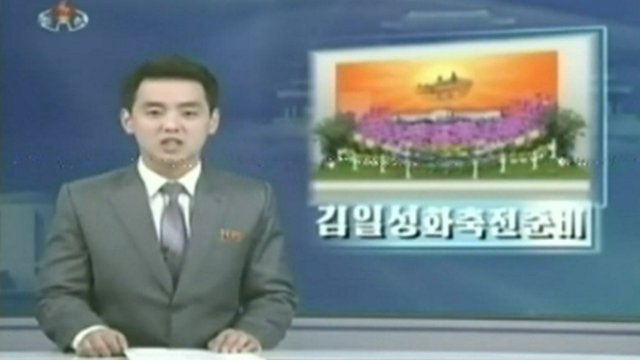 North Korean television has been showing various celebrations despite its increasingly bellicose rhetoric
"Kim Jong-un needs to understand - and I think he probably does - what the outcome of a conflict would be," Mr Kerry added.
Russia, which has expressed growing concern over North Korea, said on Friday that it had issued "an urgent appeal" to Pyongyang "to refrain from actions which could lead to further escalation of tension".
Some estimates suggest that the missiles North Korea has moved to its east coast could travel 4,000km (2,500 miles), although it is not believed that the Musudan has been tested before.
That reach would put US bases on the Pacific island of Guam within range.
A declassified section of a report from the Defense Intelligence Agency (DIA) report had warned there was "moderate" confidence that Pyongyang had developed the technology to mount a nuclear warhead on a missile.
But Mr Kerry played down the report, and White House spokesman Jay Carney said Pyongyang had "not demonstrated the capability to deploy a nuclear-armed missile".