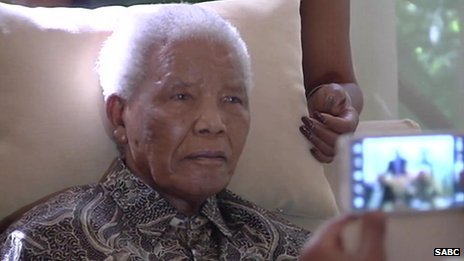 Nelson Mandela has been visited at home by ANC leaders who said later he was "in good shape and in good spirits".
The first pictures of the former South African president since he left hospital show him surrounded by well-wishers at his home in Johannesburg.
The 94-year-old was discharged on 6 April after more than a week of treatment for pneumonia.
It was the third time in the past four months that the Nobel Peace Prize laureate had stayed in hospital.
President Jacob Zuma and ANC Deputy President Cyril Ramaphosa were among senior ANC officials who called in on Mr Mandela at his home in Houghton and were given an update by his medical team.
Continue reading the main story

Milton NkosiBBC News, Johannesburg
Nelson Mandela appeared frail but better than many feared. From what I could see from SABC's exclusive video, I noticed that Mr Mandela flinched as one of his grandsons clicked a camera and a bright flash went off.
It has been many years now since photographers were requested not to use their flash when taking pictures of the 94-year-old. Mr Mandela's eyes were damaged when he worked as a political prisoner in a lime quarry on Robben Island.
There are probably two reasons why President Zuma paid his old comrade and mentor a home visit. He wanted to prove the sceptics wrong. He was dispelling the myth that the former president was in bed on a life support machine as many had speculated on social media.
Some cynics say it was pure electioneering. They say that President Zuma posed for pictures next to Mr Mandela and that he went to seek blessings from the governing ANC's most famous member with an eye on next year's crucial elections.
"After receiving a briefing from the medical team, the national officials are satisfied that President Mandela is in good health and is receiving the very best medical care," the ANC said in a statement.
President Zuma said Mr Mandela "shook hands and even smiled".
The rare video footage from his home was broadcast by South African state broadcasterSABC.
Robben Island
The veteran leader's lung problems date from his 27 years as a political prisoner.
Eighteen years were spent on the windswept Robben Island where he contracted tuberculosis.
Mr Mandela's health has been a continuing cause for concern recently. In December, he spent more than two weeks in hospital undergoing treatment for his lung ailment and gallstones.
In February, doctors dealt with a stomach condition.
Mr Mandela, who stepped down as president in 1999, is revered in South Africa for his role in ending the system of apartheid, or white minority rule.
He retired from public life in 2004 after acting as a high-profile ambassador for the country.
Mr Mandela became South Africa's first black president in the 1990s and is seen by many as father of the nation.
He was awarded the Nobel Peace Prize in 1993 jointly with former President FW de Klerk for ending apartheid and bringing democracy to South Africa.
at April 29, 2013