The North Korean spy who blew up a plane 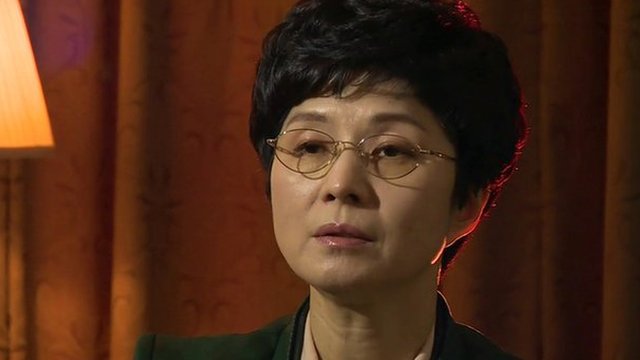 Kim Hyun-hui: "I am sad to have been born in North Korea"
Continue reading the main story

Kim Hyun-hui certainly doesn't look like a mass murderer. The 51-year-old mother of two has a gentle smile and soft voice.
Today she lives in quiet seclusion somewhere in South Korea; she won't say where. The day we meet she is, as always, accompanied by a group of hired heavies in ill-fitting suits.
She fears the North Korean government still wants to kill her, and with good reason.
Kim Hyun-hui was once an agent of the North Korean regime. Twenty-five years ago, on Pyongyang's orders, she blew up a South Korean airliner.
Sitting in a Seoul hotel room she describes to me how, at the age of 19, she was recruited from an elite Pyongyang University where she was studying Japanese.
She trained for six years. For three of them she was paired with a young Japanese woman, Yaeko Taguchi, who had been kidnapped from her home in northern Japan. She says Mrs Taguchi taught her to speak and act like a Japanese.
Continue reading the main story

Kim Hyun-hui
Then came her fateful mission.
It was 1987 and South Korea was preparing to host the Olympic Games in Seoul. North Korea's leader Kim Il-sung and his son Kim Jong-il were determined to stop it.
"I was told by a senior officer that before the Seoul Olympics we would take down a South Korean airliner," Kim Hyun-hui tells me.
"He said it would create chaos and confusion in South Korea. The mission would strike a severe blow for the revolution."
'Direct orders'
Kim and an older accomplice boarded the Korean Airlines plane in Baghdad. She placed the suitcase bomb in an overhead locker.
During a stopover in Abu Dhabi, the two North Korean agents got off and made their escape.
Hours later over the Andaman Sea, the bomb blew up. All 115 on board were killed.
But then their plan went wrong. The two agents were tracked to Bahrain and caught.
Her accomplice killed himself with a cyanide-laced cigarette, but Kim Hyun-hui failed. She was instead flown to Seoul and paraded before the international media.
"When I came down the steps of that aircraft, I didn't see anything," she says. "I just looked at the ground. They had taped my mouth shut. I thought I was entering the den of the lion. I was sure they were going to kill me."
Instead they took her to an underground bunker where the interrogations began.
At first she says she tried to keep up the pretence she was Japanese. But finally she broke.
"When I confessed, I did so reluctantly. I thought my family in North Korea would be in danger; it was a big decision to confess. But I began to realise it would be the right thing to do for the victims, for them to be able to understand the truth."
In her confession, Kim made it clear that the orders to bomb the plane had come directly from Kim Il-sung or his son and heir-apparent, Kim Jong-il.
'God-like figure'
"In North Korea everything was about the Kingdom of Kim Il-sung and his son Kim Jong-il," she says.
"Without their sanction nothing could happen. We were told our orders were 'ratified'. They only used that word when the orders came from the top.
"Kim Il-sung was a god-like figure. Anything that was ordered by him could be justified. Any order would be carried out with extreme loyalty. You were ready to sacrifice your life."
From what she tells me, it is clear Kim Hyun-hui has gone from one-time true believer in the Kim cult to an ardent hatred of the regime and a deep sense of personal victimhood.
"There is no other country like North Korea," she says. "People outside can't understand. The whole country is set up to show loyalty to the Kim royal family. It's like a religion.
"People are so indoctrinated. There are no human rights, no freedoms. 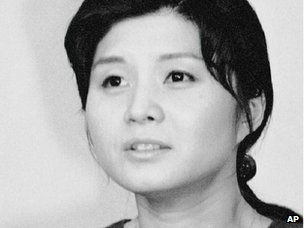 Kim Hyun-hui was sentenced to death, but later received a presidential pardon
"When I look back it makes me feel sad. Why did I have to be born in North Korea? Look at what it did to me."
She also believes, perhaps wishfully, that the days of the Kim dynasty are numbered.
With the founders of the dynasty - Kim Il-sung and Kim Jong-il - now dead, their impoverished kingdom has been handed down to the 30-year-old Kim Jong-un.
"North Korea is in a desperate situation," she says. "Discontent with Kim Jong-un is so high; he has to put a lid on it.
"The only thing he has is nuclear weapons. That's why he has created this sense of war, to try to rally the population. He's doing business with his nuclear weapons."
In 1989 a South Korean court sentenced Kim Hyun-hui to death, but President Roe Tae-Woo gave her a pardon.
She later married a South Korean intelligence officer with whom she has two children.
Some might say she got off lightly considering what she did. But she says she still carries a heavy burden of guilt.
She says she has found solace in Christianity, and in meeting and being forgiven by the families of those she killed.
"Eventually when I met the victim's families," she says, "we were all in tears hugging and crying."
During our hour-long meeting, there is only one moment when her emotions break through. It is right at the end, when I ask her about her family in North Korea. With tears welling up in her eyes, she shakes her head.
"I don't know what happened to them," she says. "I have heard that they were seen being taken away from Pyongyang to a labour camp."
at April 22, 2013