Huge rally in Kiev in support of closer ties with EU 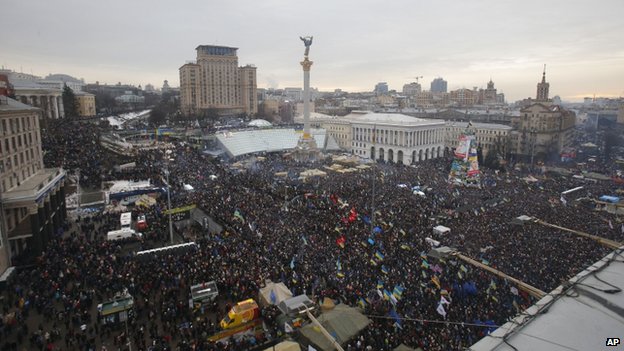 Some 200,000 people have rallied in the Ukrainian capital Kiev to protest against President Viktor Yanukovych's refusal to sign a landmark EU deal.
Mr Yanukovych backed out of signing the association agreement after months of negotiation, apparently under strong pressure from Russia.
He is to meet Russian President Vladimir Putin in Moscow on Tuesday.
The EU has put any new talks on the agreement on hold until there is a clear commitment to sign.
Continue reading the main story

David SternBBC News, Kiev
History-making sized gatherings have become routine during this pro-European, anti-government protest movement in Ukraine. This Sunday's demonstration was no exception, seeming to equal or exceed previous turnouts.
Once again, the multitude filled Kiev's Independence Square to capacity and spilled far into neighbouring streets. The mood was jubilant, defiant and determined.
Speeches by various foreign dignitaries, including United States Senator John McCain, underscored the Ukrainian protests' significance beyond Ukraine's borders.
However, another, smaller, pro-government rally, not far from Independence Square, was a reminder that there are some who do not support European integration - at least not right now.
Coming mostly from the country's south and east, they said that they are suffering economically, and fear things could become worse, if European goods flood Ukraine's market and they are forced to compete with the advanced European labour market.
It is unclear what percentage of popular opinion these people represent. Also, some may have received official encouragement in expressing their views. Still, their fears seemed genuine and their predicament real.
News agency estimates of the size of the crowd at Independence Square ranged from 150,000 to 300,000.
This is the latest in a series of demonstrations over the past few weeks by the opposition who see Ukraine's future as part of the EU rather than aligned with Russia.
The series of protests, the largest since Ukraine's 2004 Orange Revolution, is designed to push Mr Yanukovych to dismiss his government and call fresh elections, opposition leaders say.
Makeshift barriers around the perimeter of the main protest encampment on Independence Square have been strengthened following an attempt by special police to dismantle them earlier this week.
Opposition leaders have urged protesters to remain vigilant, fearing "provocateurs" could trigger clashes between rival demonstrators.
'Anti-colonial revolution'

Yuri Lutsenko, a former interior minister and opposition politician, told the protesters on Independence Square they were fighting for independence.
"What is happening on the Maidan [square] today?" he said.
"It is an anti-colonial revolution. Above all, Ukrainians turned out to say to Moscow: 'We are no longer under your command, we are an independent country'."continued
at December 15, 2013