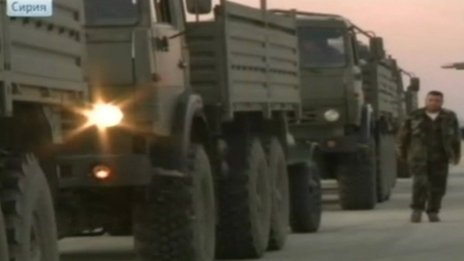 Russia has sent 75 vehicles to Syria to assist the international operation to destroy or remove its chemical weapons.
Defence Minister Sergei Shoigu said 50 Kamaz lorries and 25 Ural armoured lorries were flown to Latakia last week, along with other equipment.
They will be used to help transport chemicals to the Mediterranean port, from where they will be shipped abroad.
Syria agreed to abandon its chemical arsenal to avert potential US military action after a sarin attack in August.
Under a deal brokered by the US and Russia, the complete elimination of all chemical weapons material and equipment must be completed by the first half of 2014.
The "most critical" chemicals, including around 20 tons of the blister agent sulphur mustard, must be shipped out by 31 December.
Last week, the Organisation for the Prohibition of Chemical Weapons (OPCW) outlined its plan for their destruction outside Syria.
US satellites and Chinese surveillance cameras will track the progress of the Russian lorries as they carry the chemicals from 12 storage sites in Syria to Latakia. Danish and Norwegian vessels will take the chemicals from there to a port in Italy.
They will then be loaded on to a US Navy ship and taken out into international waters before being destroyed in a specially created titanium tank on board.
The other Russian equipment flown to Syria included water tanks, military field kitchen units and tents, which were needed to "service" the foreign contingent involved in the operation, the Interfax news agency reported. 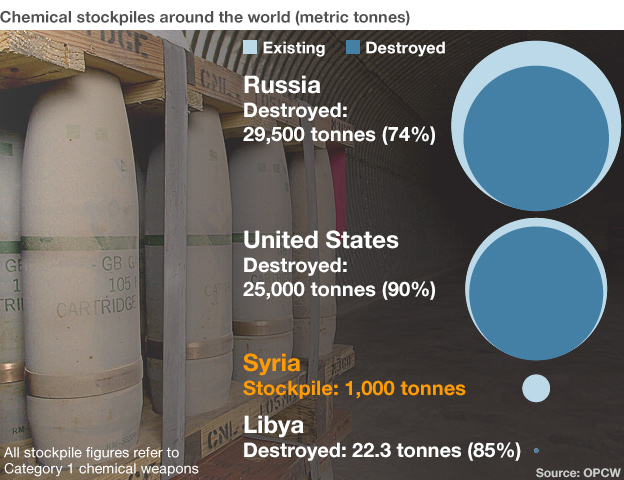