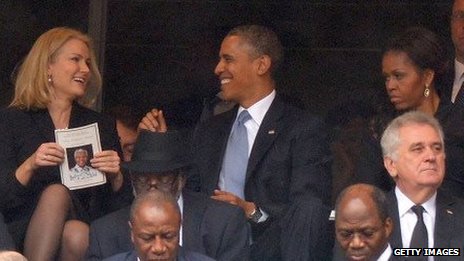 What's more scandalous: the selfie or the media's reaction?
US President Barack Obama's friendly photograph with Danish PM Helle Thorning-Schmidt at Nelson Mandela's memorial service has one columnist writing that the US president acted like a "hormone-ravaged frat boy on a road trip to a strip bar".
The New York Post's Andrea Peyser had a look at the newswire photos of the event and contends that Mr Obama was too jovial and flirty in his interaction with Ms Thorning-Schmidt, a "Danish hellcat" who "hiked up her skirt to expose long Scandinavian legs covered by nothing more substantial than sheer black stockings".
And won't somebody think of the poor first lady, Michelle Obama?
"Michelle frowned and looked as if she wanted to spit acid at the man she married, a good-time guy who humiliated her in front of their friends, the world and a blonde bimbo who hadn't the sense to cover up and keep it clean," she writes.continued
at December 13, 2013