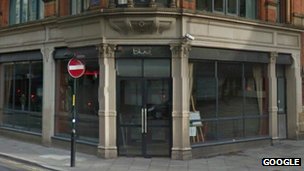 The man was seen near the Bluu bar in the city's Northern Quarter
A man seen running naked through Manchester city centre has been found dead, police said.
The body of the man in his 20s was found at the bottom of a lift shaft on a construction site, off Goadsby Street, on Monday lunchtime.
Police had been called to reports of a naked man running through the Northern Quarter at 22:30 BST on Friday.
Officers are appealing for witnesses, but said his death was not being treated as suspicious.
A post mortem examination is due to take place later in the week to try to establish the cause of death.
'Tragic case'

Police said they were unable to find the man after they were called by people concerned for his welfare on Friday night.
The case has been referred to the Independent Police Complaints Commission to look into how officers responded.
Det Insp Brian Morley said: "This is a tragic case where a man has lost his life after apparently falling into a lift shaft and our thoughts are with his family at this time.
"Our work now is concentrating on the minutes leading up to his death.
"It was a normal busy Friday night and no doubt dozens of people must have seen this man. I have no doubt that if you saw him you would remember."
The man is thought to have got undressed near Abode bar, Piccadilly, and left a bag containing a laptop, phone and passport nearby.
Witnesses reported seeing him at the Holiday Express and Bluu bar in the Northern Quarter, before he climbed into the construction site, police said.
at August 20, 2013