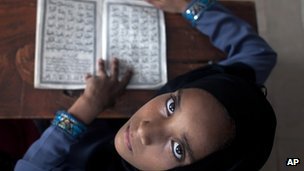 The US Treasury has imposed economic sanctions on a Pakistani Islamic school it describes as a "terrorist training centre" which provides support to al-Qaeda and the Taliban.
In a statement it said that the Ganj madrassa in Peshawar was being used as a training and recruiting base.
The Treasury said that it was the first time that a madrassa had been the target of sanctions.
There has so far been no reaction to the move from madrassa staff.
Madrassas are schools managed under Islamic principles.
The sanctions forbid Americans from having any business interaction with the Ganj madrassa, in addition to freezing any of its assets that come under US jurisdiction.
"The Ganj Madrassa serves as a terrorist training centre where students, under the guise of religious studies, have been radicalised to conduct terrorist and insurgent activities," the statement said.
"In some cases, students were trained to become bomb manufacturers and suicide bombers."

According to the US Treasury, the madrassa was also used as a base by the radical Lashkar-e-Taiba group - blamed for the November 2008 Mumbai attacks that killed 166 people.
Correspondents say that Ganj madrassa head Fazeel-A-Tul Shaykh Abu Mohammed Ameen Al-Peshawari, also known as Shaykh Aminullah, has been classified as a terrorist by the US and UN since 2009 because of his support for al-Qaeda and the Taliban.
"This action does not generally target madrassas, which often play an essential role in improving literacy and providing humanitarian and developmental aid in many areas of the world, including Pakistan," the statement said.
The Treasury also announced sanctions on Umar Siddique Kathio Azmarai, who it said had served as a facilitator and courier for al-Qaeda since the late 1990s, including providing support for the family of Osama bin Laden.
at August 20, 2013