Zimbabwe's Tsvangirai may be charged for 'judiciary insult' 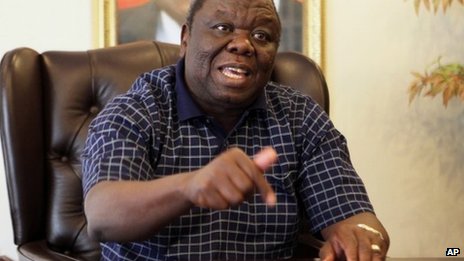 Zimbabwe's opposition leader Morgan Tsvangirai may face contempt of court charges for "disparaging remarks" he made about the judiciary.
High Court judge Chinembiri Bhunu said prosecutors would be informed.
His comments came as Mr Tsvangirai's Movement for Democratic Change (MDC) party lost two court cases relating to the disputed 31 July election.
The Constitutional Court said President Robert Mugabe's re-election was "free, fair and credible".
Mr Mugabe won with 61% of the presidential vote against 34% for Mr Tsvangirai.
The two had been part of power-sharing government formed in 2009 under pressure from regional leaders following elections the year before marred by violence and allegations of rigging.
The Constitutional Court made its ruling on Tuesday despite the MDC withdrawing its case last Friday, alleging it would not get a fair hearing.
'Soiled dignity'

The MDC's separate case before the High Court seeking full details of the results from the electoral commission was also dismissed on Tuesday.
Justice Bhunu said the High Court did not have the jurisdiction to rule on the matter, adding the case had no merit because of the applicant's "gross conduct in soiling the dignity and integrity of this court".
Mr Tsvangirai, who served as prime minister in the power-sharing government, had said there was little difference between the judiciary and Mr Mugabe's Zanu-PF party as judges had been appointed while he was in office without him being consulted, as required by law.
Such "scathing and disparaging remarks concerning the entire judiciary of this country" would be referred to either the attorney general's office or the National Prosecuting Authority for them to consider pressing contempt of court charges, Justice Bhunu said.
Mr Mugabe's defence lawyer, Terrence Hussein, told the BBC: "This is serious, the expectation is that the relevant authorities will look into the case."
Mr Mugabe, 89, is due to be inaugurated for another five-year term on Thursday.
The MDC said that more than a million voters were prevented from casting their ballots - mainly in urban areas considered to be its strongholds, allegations backed up by a 7,000-strong group of local observers, the Zimbabwe Election Support Network.
But the African Union has said that any irregularities were not enough to overturn the margin of victory.
Meanwhile, the United States has refused to lift sanctions on Zimbabwe despite a call by regional leaders for the West to do so.
At a meeting of the Southern African Development Community (Sadc) over the weekend, Malawi's President Joyce Banda said "Zimbabweans have suffered enough".
But Ms Psaki said the US stood by its assessment that while the elections were relatively peaceful, they were not a credible expression of voters' opinions "due to serious flaws throughout the electoral process, as highlighted by the regional and domestic monitors".
at August 20, 2013