The European Commission has adopted protective measures to try to contain a bird flu outbreak after new cases were reported in the UK and the Netherlands.
The measures include killing animals in infected areas and banning sales of poultry products from those areas.
The Dutch government has reported the "highly contagious" H5N8 strain at a poultry farm there.
The UK reported a case at a duck farm in East Yorkshire, and the Commission said it was "probably identical".
H5N8 can potentially affect humans.
EU officials say the outbreaks may be linked to bird flu recently found in Germany.
They say it could have been spread by migratory wild birds heading south for winter, but that tests are continuing to confirm any links between the three cases.
Three-day ban

The European Commission said in a statement that the UK and the Netherlands were already applying directives on culling affected poultry, prohibiting sales of affected poultry products and live birds, and establishing protection zones.
It said: "The measures aim at quickly bringing the disease under control and at preventing the spread of the highly pathogenic avian influenza within the affected member states, to other member states and to third countries."

At the scene: BBC's Anna Holligan in Hekendorp
It was a tense and traumatic day at the farm.
The idyllic Dutch image was destroyed by the hum of a truck carrying an industrial size gas canister and the appearance of men in orange boiler suits. The health and safety teams came to Hekendorp to gas 150,000 hens.
Their primary concern is to contain the outbreak. Poultry farmers, even those operating outside the 10km exclusion zone, have an additional concern. Many are worried about the potential damage to the reputation of Dutch poultry products.
The industry has been brought to a standstill. A nationwide transportation ban will remain in place until at least Tuesday. The Netherlands is the second largest exporter of agricultural products in the world. It exports more than six billion eggs annually.
We watched from behind the fire retardant barrier as diggers poured hundreds of dead chickens into trucks. Neighbours living around the contaminated farm see the cull as an unpleasant but essential sacrifice. 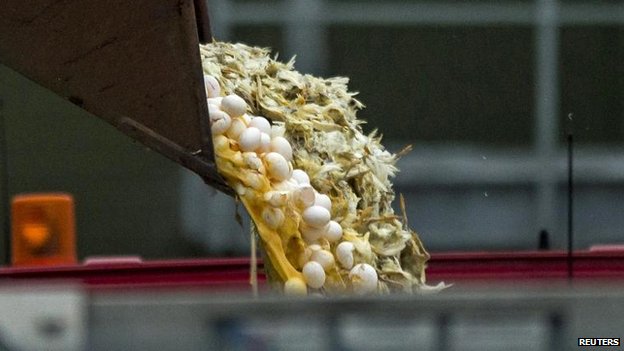 Eggs and chickens are dumped into a container at Hekendorp

The Dutch authorities have already begun destroying 150,000 hens at the infected farm, in the village of Hekendorp.
"This highly pathogenic variant of avian influenza is very dangerous for bird life," the Dutch government said in a statement (in Dutch).
"The disease can be transmitted from animals to humans."
The Dutch economics ministry says humans can only be infected through very close contact with infected birds. 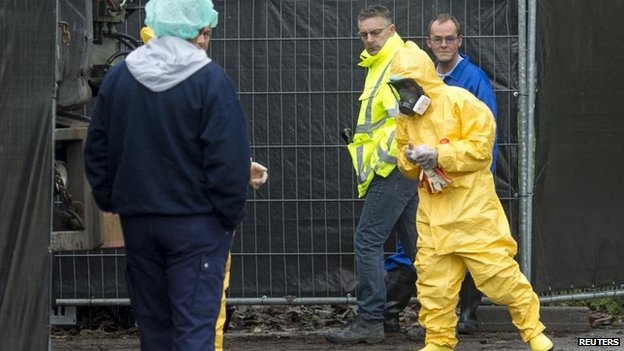 Experts wore protective suits before examining the Hekendorp farm
The authorities have imposed a three-day nationwide ban on the transportation of poultry and eggs.
Earlier this month, a farm in north-eastern Germany detected cases of H5N8, which had previously not been reported in Europe.
The strain has never been detected in humans, but an outbreak in South Korea meant millions of farm birds had to be slaughtered to contain it.
Also on Monday, Egyptian health officials said a woman had died from the deadliest strain of the virus, H5N1, after coming into contact with infected birds in the south of the country.
Dangerous strains

Meanwhile, officials in the UK confirmed at least one case of bird flu in Yorkshire, but insisted the risk to public health was "very low".
A cull of poultry is being carried out at the site and an exclusion zone is in place.
The Commission said: "The information available indicates that the H5 virus in the UK is probably identical to the H5N8 virus found in the Netherlands and in Germany." 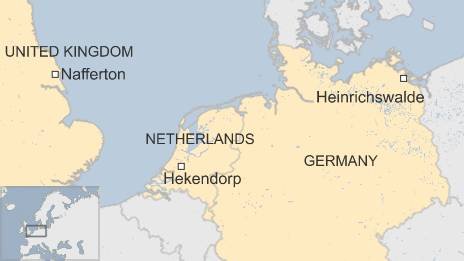 The head of the World Animal Health Organisation, Bernard Vallat, suggested that bird feed at the farms might have become contaminated by wild migratory birds.
"If feed is not protected and a wild bird comes to eat it, it's enough to contaminate the feed and then those that eat that feed," Mr Vallat said.
Most forms of bird flu do not infect humans, but H5N1 and H7N9 have caused serious infections in people, the World Health Organization (WHO) says.
The majority of those infected had come into close contact with live or dead poultry.
There is no evidence to suggest H5N1 and H7N9 can be passed to humans through properly prepared poultry or eggs, the WHO says.
H5N1 has a mortality rate of about 60% in humans, and led to 384 deaths between 2003 and December 2013, according to WHO figures.
Common symptoms include a high fever and coughing.
at November 17, 2014