A Palestinian driver has rammed a car into several pedestrians in Jerusalem, killing a policeman, hours after clashes at the city's holiest site.
About a dozen people were injured and the driver was shot dead by police.
Hamas militants said they carried out the attack. PM Benjamin Netanyahu said it was a result of "incitement" by both the Palestinian Authority and Hamas.
A similar car attack by a Palestinian took place in the same area two weeks ago which left a woman and a baby dead.
Meanwhile Jordan has recalled its ambassador to Israel over what it called the "unprecedented Israeli escalation" at holy and sensitive sites in Jerusalem.
Also citing continued settlement activity, Jordan is to lodge a formal complaint to the United Nations Security Council in protest, the Jordanian state news agency Petra reported. 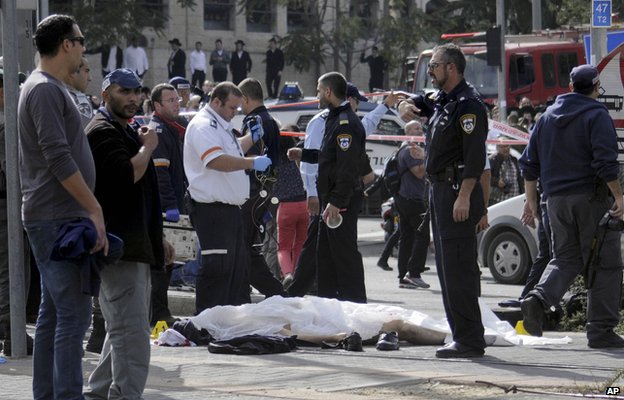 Wednesday's attack comes two weeks after a similar incident where two people died
The man killed in Wednesday's car attack was police Chief Inspector Jidaan Asad, 38, police spokesman Micky Rosenfeld said.
The driver of the car - named as Ibrahim al-Akari - was from Shuafat refugee camp in the east of the city, police say.
His Facebook page states that he is a member of Hamas, and the Twitter account for the group's armed wing, the al-Qassam Brigades, described him as a member and a martyr.
Two weeks ago a Palestinian from the Abu Tor area drove his car into a tram station, killing a three-month-old baby and an Ecuadorean woman.
East Jerusalem has experienced growing unrest in recent months with Palestinians angry at Israeli settlement expansion on occupied land and restricted access to the al-Aqsa Mosque Compound, known to Jews as the Temple Mount, says the BBC's Yolande Knell in Jerusalem.
At times of tension, Israeli police bar male Muslim worshippers under the age of 50 from entering the compound as a security measure.

Analysis: BBC's Yolande Knell in Jerusalem
Security camera footage shows a white van speeding along a stretch of Route One that runs along the so-called Green Line between East and West Jerusalem.
The vehicle hits pedestrians, including Israeli police officers, before mounting the platform of the tram that runs along the same road.
Later grainy pictures appear to show the Palestinian driver running erratically across the street before he is shot and killed.
This attack - the second of its kind in two weeks - has exacerbated tensions in Jerusalem.
The day began with clashes at the al-Aqsa Mosque Compound - where Israeli police used tear gas, stun grenades and rubber bullets against a crowd of Palestinian protesters throwing stones and fireworks.
There are now clashes in other East Jerusalem neighbourhoods, most notably in the Shuafat Refugee Camp, home to the Palestinian motorist who carried out the latest attack.

The Temple Mount/al-Haram al-Sharif compound was briefly closed earlier to visitors after dozens of Palestinian protesters fought with police.
Rabbi Glick is a well-known campaigner for the right of Jews to pray at the site, which is currently prohibited.
The compound - known to Jews as the Temple Mount and to Muslims as al-Haram al-Sharif - is the holiest site in Judaism, and contains the al-Aqsa Mosque - the third holiest site in Islam. 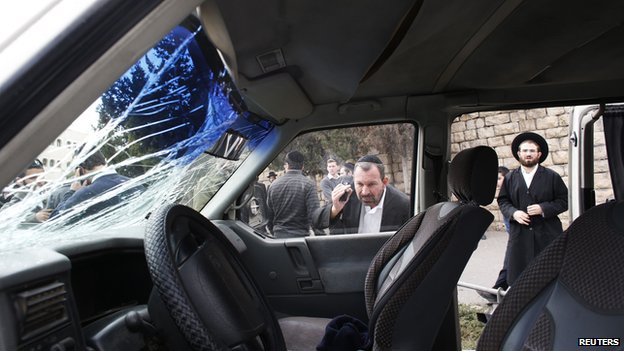 The incident was caught on CCTV cameras, showing the driver exiting the vehicle and running before being shot by police 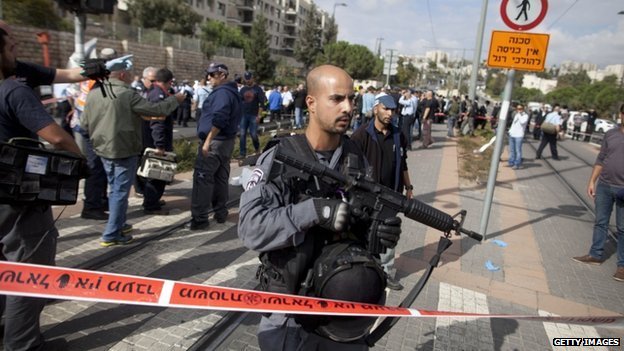 The authorities have called it a "terrorist" attack 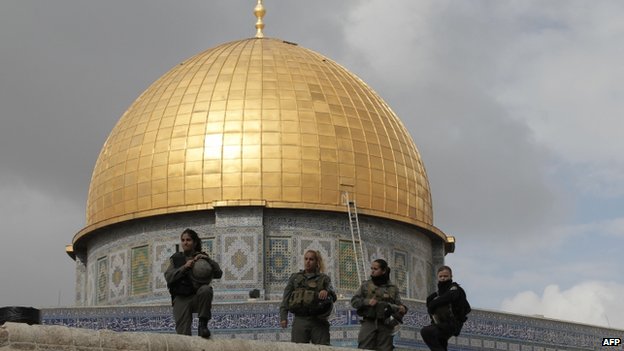 Security was heightened at the Dome of the Rock after the morning clashes
Earlier on Wednesday, dozens of masked protesters hurled rocks and launched fireworks at police near the non-Muslim visitors' entrance to the site, Israeli police said.
They said they managed to disperse the crowd using stun grenades, and no arrests were made. Several police officers were injured in the incident, they added.
A Palestinian manager at the compound said some 20 people were wounded in the clashes, Reuters reports.
Last week, a 31-year-old Palestinian man suspected of attacking prominent activist Rabbi Glick in Jerusalem was shot dead after opening fire, police said, when officers surrounded his home.
The fate of Jerusalem is one of the most contentious issues between Israel and the Palestinians.
The Palestinians want East Jerusalem as the capital of a future state, while Israel regards the whole of Jerusalem as its "eternal and indivisible capital".
Israel occupied East Jerusalem in the 1967 Middle East war and annexed it in 1980 in a move not recognised internationally. 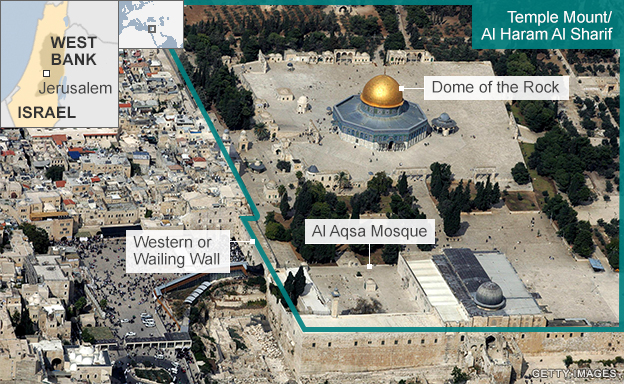