EU justice measures backed by MPs despite anger over procedure 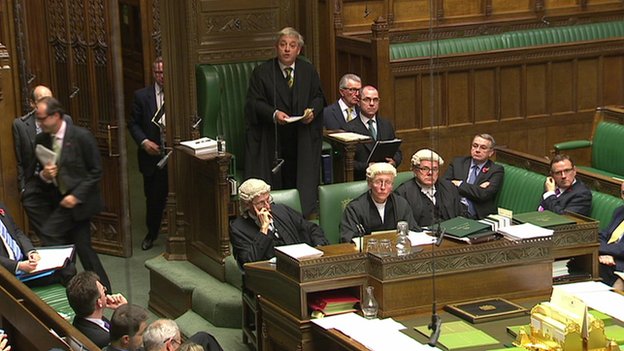 The government has won its bid to sign up afresh to 35 EU justice measures - including the European Arrest Warrant - following a dramatic Commons vote.
But ministers were accused of breaking a promise to hold a vote on the warrant itself.
The debate ended early when Labour lost its bid to use a rare Parliamentary procedure to postpone the decision.
Earlier, Commons Speaker John Bercow said people would be "contemptuous" of the government's tactics.
BBC political correspondent Carole Walker said there were "scenes of chaos" in the Commons chamber.
Speaker's ruling

The government opted out of all 133 EU police and criminal justice measures measures in 2013, a decision that will take effect on 1 December.
Ministers plan to rejoin 35 of the measures, including the European Arrest Warrant, before that deadline.
There had been confusion over whether the debate and vote would cover the warrant, which is opposed by some Conservative MPs.
Mr Bercow ruled that it would not. But Home Secretary Theresa May said MPs could still have a say on the warrant by debating the 11 other EU justice measures that required a vote by law before they could be adopted by the UK. 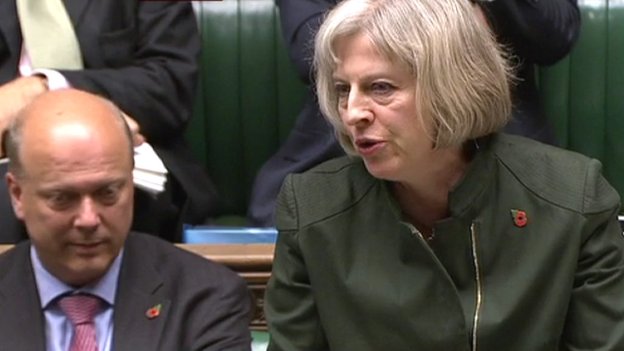 Theresa May said the government had not been required to hold a vote on the measures
The debate came to an end when shadow home secretary Yvette Cooper invoked a rare procedure to ask that the "question be not now put", asking Mrs May to come back with a motion which specifically included the warrant.
When MPs rejected Mrs Cooper's motion, the vote on the EU justice measures took place immediately, with MPs voting in favour by 464 to 38.
'Sorry saga'

Critics of the warrant say it is overused and a threat to the liberties of Britons and the sovereignty of the UK.
But supporters, including the government and law enforcement agencies, say it is a vital tool to protect the UK and bring criminals to justice across EU borders.
The government was criticised by Mr Bercow and Conservative MPs before the main debate started.
"There is not today to be a vote on the specific matter of membership of the European Arrest Warrant," Mr Bercow told MPs.
The speaker said he himself had expected a vote on the warrant, saying it was a "sorry saga" and that "the House should not be put in that position".
"A commitment is a commitment to be honoured," he said, "rather than trying to slip things through some sort of artifice".
He said the public expected "straightforward dealing and they are frankly contemptuous, and I use the word advisedly, of what is not straightforward dealing".
Conservative MPs also wanted a specific vote on the warrant.

Sir Richard Shepherd said the government's behaviour had been "sly" while Jacob Rees-Mogg called it "underhand".
Bill Cash, who chairs the Commons European Scrutiny Committee, said: "This is a disgraceful way of going about a very, very important matter. It is tainted with chicanery, it is not the way this Parliament should be treated."
Despite the speaker's ruling, Justice Secretary Chris Grayling told the Commons the vote would be on all 35 of the EU crime and justice measures.
And Mrs May said the government was not legally required to bring the measures to the House. There was a legal requirement to "transpose" some of them into UK law, she said, but this was usually done through a special committee of MPs.
When the main debate got under way, Mrs May said she understood concerns over the warrant but said she had legislated to make it "better and safer".
Setting out the case to retain it, she told MPs more than 95% of people extradited from the UK were foreign nationals, including suspects wanted for 124 murders, more than 100 rapes, nearly 500 serious assaults and seven terrorism cases.
at November 10, 2014