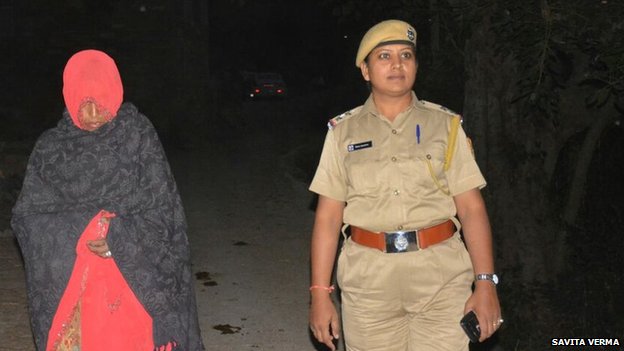 A woman in northern India has been stripped naked and paraded on a donkey on the orders of village elders after being accused of killing her nephew.
The village council in Rajsamand district in Rajasthan state also ordered the 45-year-old woman's face to be blackened.
Her nephew's family say she killed him. Police have arrested 39 people.
Orders given by village councils - panchayats - carry no legal weight but are widely respected in rural areas.
Rajasthan's principal secretary for rural development, Shreemat Pandey, told the BBC it was "completely illegal" for the panchayat to hand down such a punishment.
Senior police official Shweta Dhankhad told BBC Hindi that on 2 November, a 45-year-old man, Vardi Singh, killed himself in Thurawad village.
Three days after his funeral was held, his wife and some other relatives went to the police alleging that Mr Singh had been killed by his aunt.
On Saturday night the family approached the village council which agreed that the aunt was guilty of murder.
On the council's order, the woman's head was shaved and her face was blackened with coal dust, she was stripped naked and taken around the village on a donkey.
"It's a shameful incident that a woman was treated so badly on orders from the village council," Ms Dhankhad said.
"Initially, she was even afraid to talk about what had happened to her but after the police and officials from the social welfare department arrived, she was able to feel a little safe and narrate her ordeal."
Correspondents say women are routinely stripped and paraded naked in rural India in order to punish and humiliate them.
In October, a woman in the eastern state of Jharkhand was stripped and paraded naked before several family members by her in-laws who wanted a big dowry from her.
In July, a 60-year-old woman was beaten, stripped and tied to an electricity pole in a village in the eastern state of Orissa after local people accused her of being a witch.
In January 2012, some upper-caste men in Maharashtra state beat, stripped and paraded naked a low-caste Dalit woman because her son had eloped with an upper-caste girl.
Most of these incidents of public shaming take place in remote villages and the victims, almost always from economically and socially disadvantaged sections, have no alternative but to continue to live in the communities where they were humiliated.
at November 10, 2014