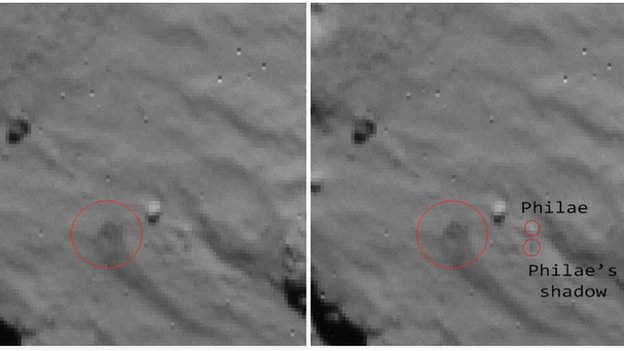 The image on the left shows the dust cloud thrown up by the landing. Right: Philae and its shadow.
Continue reading the main story

Images of the Philae probe moments after its initial touchdown have been published by the European Space Agency.
There was a nerve-wracking wait after the solar-powered Philae lander bounced a mile back into space following its first contact with comet 67P.
It successfully landed a few minutes later, over half a mile away from its intended spot.
Now the European Space Agency reports pictures of the tool on its rebound have been identified.
The photographs were unveiled on the Esa's Rosetta Blog, showing a few pale pixels - thought to be Philae - accompanied by a dark patch, which experts conclude is its shadow.
Observers from the agency's flight dynamics team spent hours analysing and reviewing the footage before their conclusion was made public.
Philae has been returning pictures and other data to earth via the Rosetta satellite, but until now scientists have not had access to images of the probe itself after landing.
The difficult landing damaged the craft and its current location means the battery that powers it may not be able to recharge.
It is currently in stand-by mode after running out of power but before that happened engineers attempted to maximise the possibility of recharging its power supply by sending a command to reposition the lander.
This involved raising Philae by 4cm and rotating its main housing by 35% in order to ensure the largest solar panel catches the most light.
Prof Mark McCaughrean, Esa's senior scientific adviser, has described the agency as "hugely happy" with the information relayed by Philae so far.
at November 16, 2014