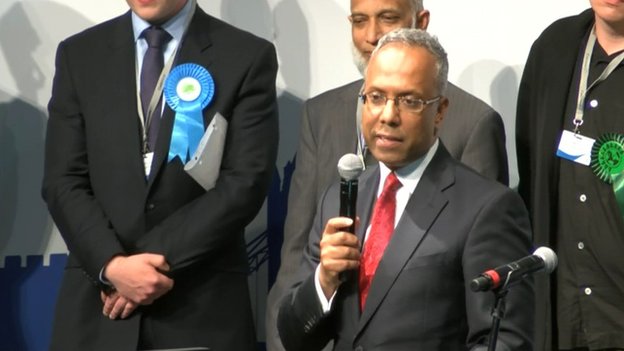 A report into allegations of fraud at Tower Hamlets Council which criticised its awarding of grants and selling of property reveals a "culture of cronyism", the government has said.
Auditors investigated allegations of "poor financial management".
They found a lack of transparency when issuing grants and that on some occasions the council had awarded money to groups which had not applied.
The council, in east London, said it "regretted" flaws in its processes.
But it added that the report showed "no evidence of criminality or fraud".
'Rotten boroughs' 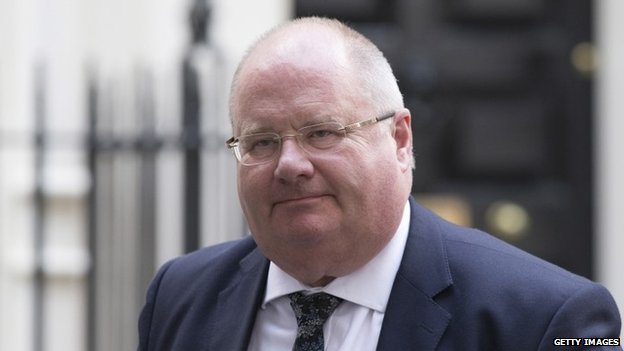 Eric Pickles instructed the auditors to investigate the financial regulation of the authority
It follows allegations in a BBC Panorama investigation that directly-elected mayor Lutfur Rahman diverted charity money for political support.
Mr Rahman has denied all allegations of electoral malpractice.
Mr Pickles said he had no choice but to appoint three commissioners to work with the council until March 2017 as there was "no place for rotten boroughs in 21st Century Britain".
The report highlighted the "954 Fund" of £954,000 in surplus monies identified in 2012.
Continue reading the main story

It paints a deeply concerning picture of... denial, secrecy the breakdown of democratic scrutiny and accountability, and a culture of cronyism risking the corrupt spending of public funds”

Eric PicklesCommunities Secretary
It was found to have "no open application process at all, with monies targeted at member discretion" and in some cases grants were awarded to organisations ruled ineligible.
'Possibility of manipulation'

The report also found that a proposal to award money to lunch clubs for Jewish, Sikh and Hindu communities resulted in £99,212 being awarded to Bangladeshi or Somali groups, none of which had applied for the money.
The report also highlights the controversial sale of Poplar Town Hall to Dreamstar Ltd in 2011.
The authority accepted a late, lower bid from the company, which was found to have an "association with the mayor", despite being advised to accept an offer from another bidder.
Dreamstar's owner had helped the mayor in his election campaign,
PWC said: "The acceptance of a late bid in whatever form created the possibility of manipulation, which could have been avoided or significantly reduced, either by excluding the late bid... or by delaying the opening of all bids."
Dreamstar won the contract race but did not have the finances available to purchase the lease within the four-week timeframe.
It also asked for and received the council's consent to change the contract to sub-let and to change the use of the listed property.
This was granted at the discretion of the planning officer, rather than referred to the development planning committee, as would be expected.
PWC said the actions showed the "existing governance arrangements have weaknesses".
Addressing the House of Commons, Mr Pickles said: "It paints a deeply concerning picture of... denial, secrecy the breakdown of democratic scrutiny and accountability, and a culture of cronyism risking the corrupt spending of public funds."
'Residents let down'

Mr Pickles said he had proposed an intervention package which included:
The council has 14 days to consider and respond to the proposals.
Mr Pickles said: "The report has cost just under £1m which will be borne by the council. It would have been much cheaper had the mayoral administration not been so obstructive.
"In all of this it is the residents of Tower Hamlets that have been let down."
In a statement, the council said: "In our view there is no evidence that these flaws of process are 'regular or endemic', meaning that there is no failure to comply with our best value duty."
The report also found that in response to the BBC Panorama programmeThe Mayor and Our Money, the authority spent £101,479 getting advice from law firm Taylor Wessing and PR consultants Champollion.
at November 04, 2014