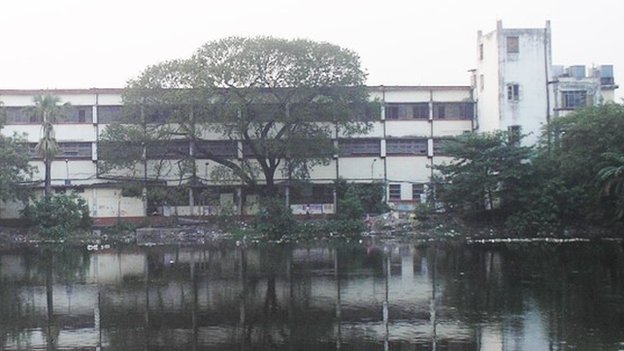 A group of junior doctors beat a suspected thief to death at a medical college in the eastern Indian city of Calcutta, police say.
The man was tied to a pillar, beaten with bamboo sticks and his penis slashed with a razor.
Police say he was accused of stealing mobile phones. Two people have been detained and an investigation ordered.
Correspondents say the killing highlights the widespread problem of mob lynching in India.
But what is shocking about the latest incident is the involvement of a group of doctors from a leading medical college.
"Preliminary inquiries have revealed that nearly a dozen junior doctors picked up the man on suspicion of stealing mobile phones," Calcutta's deputy commissioner of police Dhrubajyoti De told the AFP news agency.
They dragged the man into a room at the 140-year-old state-run Nilratan Sarkar Medical College and Hospital and carried out the attack, before leaving him to die.
"Some of them even slashed him on his private parts," Mr De told AFP, adding that labourers working nearby alerted police to the attack.
"Police found the man lying in a pool of blood. A razor was also seized from the spot," he said.
Mr De said the wounds on the man's body "bear the marks of inhumane torture".
West Bengal deputy health minister Chandrima Bhattacharya has described the incident as "very shocking" and ordered an investigation.
Students at the medical college told The Telegraph newspaper that hostel inmates were angry after repeated thefts.
"Mobile phones and laptops have been stolen from the hostel... There are no guards at the entrance, including at night. Anyone can enter the hostel," a junior doctor told the newspaper.
at November 17, 2014