Sophie Brannan, 11, died in hospital after being hit by the car on Sandbank Street on Friday night
Continue reading the main story

The car that mounted a pavement in Glasgow and killed an 11-year-old girl in a hit-and-run was hired, detectives have revealed.
Sophie Brannan, from Maryhill, died after she was struck by a black Vauxhall Astra which mounted the path in Sandbank Street on Friday night.
Her 10-year-old friend Chelsea Sommerville and Chelsea's 36-year-old uncle, Joseph Lloyd, were also injured.
The car was later found abandoned in Lochburn Street.
Police said the five-door Astra had a "14" registration plate and had been hired.
Det Supt Stevie Grant urged the man who hired the car to hand himself in.
"We know that the car involved had been hired and we also know who had access to it," he said. "However, we cannot at this time say that the person who hired it was the driver involved in the crash.
"We have yet to trace the person who hired this car and I would urge him to come forward and speak to police at the earliest opportunity." 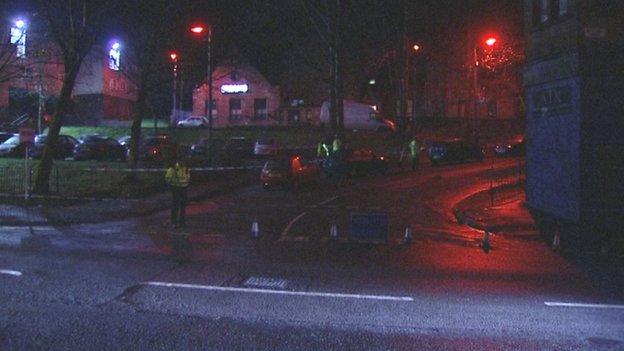 Police at the scene following the incident
The driver has been described as white, male, aged 25 - 35, of medium build with short shaven hair. He was wearing a dark jacket, dark jeans and white trainers.
Police have appealed for anyone who saw the crash or the vehicle involved, either before or after the incident, to contact them.
The car struck the pedestrians in Sandbank Street at about 19:40 then made off into Maryhill Road. It then went on to Lochburn Road where it collided with a Ford S-Max taxi.
The driver then abandoned the car and ran off towards the canal.
'Right thing'

Chelsea was taken to Yorkhill Hospital where she is being treated for a broken leg while her uncle is being treated for a broken shoulder at the Western Infirmary.
Det Supt Grant said: "The thoughts of the officers involved in the investigation and that of Police Scotland are with the family of Sophie Brannan, and the injured parties Chelsea Sommerville and her uncle Joseph Lloyd.
"So far, the response from the local community has been excellent, however, we need further information.
"I would appeal to anyone who saw the crash or the vehicle involved, either before or after the incident to come forward. People may not realise that a little bit of information could be vital to this investigation.
"It is imperative that we trace the person responsible. I would urge anyone who knows who this man is to get in touch. I would also appeal to him to do the right thing and come forward."
at November 16, 2014