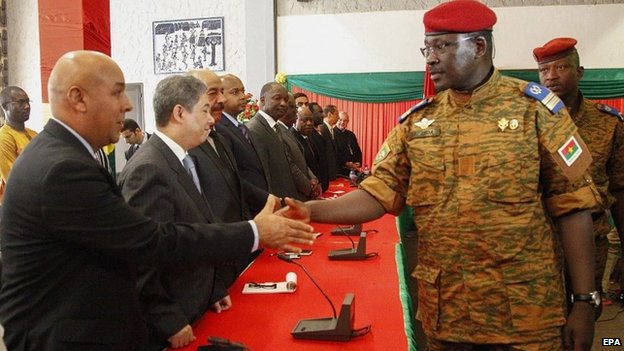 The African Union (AU) has given Burkina Faso's military a two-week deadline to hand power to a civilian ruler or face sanctions.
The AU said the army had acted unconstitutionally when it took over after President Blaise Compaore was forced to resign on Friday.
The military said a civilian-led transitional government would be established as quickly as possible.
Mr Compaore quit after mass protests at his bid to extend his 27-year rule.
On Saturday, the military named Lt Col Isaac Zida, previously second in command of the presidential guard, as the new interim ruler.
'Supporting role'

A popular revolt led to Mr Compaore's resignation, but the military takeover was against democracy, said AU official Simeon Oyono Esono, following a meeting of the body's Peace and Security Council in Ethiopia.
The AU will apply sanctions against Burkina Faso if the military fails to give up power within two weeks, Mr Esonohe told Reuters.
The BBC's Emmanuel Igunza in the Ethiopian capital Addis Ababa says the sanctions could include suspension of Burkina Faso's AU membership and a travel ban on military officials.
Jump media player
Media player help
Out of media player. Press enter to return or tab to continue.
No protest against military, reports Laeila Adjovi
The AU's Peace and Security Council is expected to meet again in two weeks' time to discuss the crisis, he says.
Col Zida told diplomats and journalists in Burkina Faso's capital, Ouagadougou, that the military had no plan to usurp power.
It wanted a transitional government made up of civilians to take office, he said.
The military would play a supporting role, Col Zida added.
BBC Afrique analyst Lamine Konkodo says many people in Burkina Faso expect Col Zida to honour his word, and it is now up to politicians and civil society leaders to agree on who will lead a transitional government. 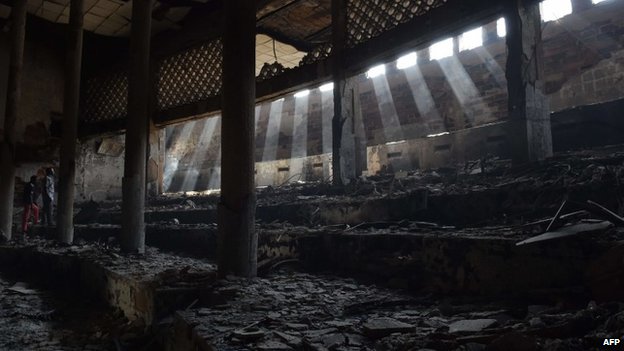 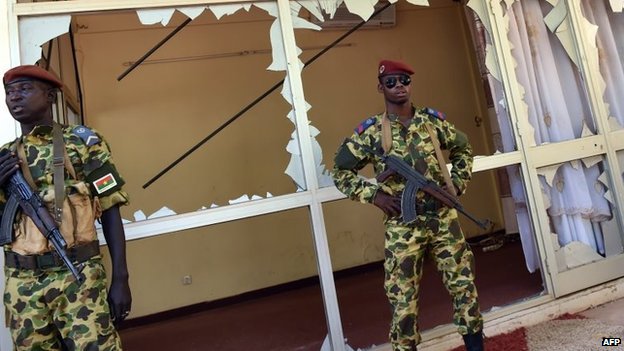 The headquarters of state TV were also attacked
Most businesses were open in Ouagadougou as the city returned to normal for the first time since last week's protests against Mr Compaore's rule.
At least one demonstrator was killed on Sunday after soldiers fired shots at the state TV station and barricaded the main square in Ouagadougou.
Thousands of protesters demanded the military give up power, chanting slogans like: "The soldiers have stolen our revolution", "Zida get out!" and "Zida is Judas."
Mr Compaore, who has now fled to Ivory Coast, first seized power in a coup in 1987, and thereafter won four disputed elections.
The protests were triggered by Mr Compaore's plan to amend the constitution so that he could run for office again in elections next year.
at November 04, 2014