Woman raped in Dennistoun after being offered lift home 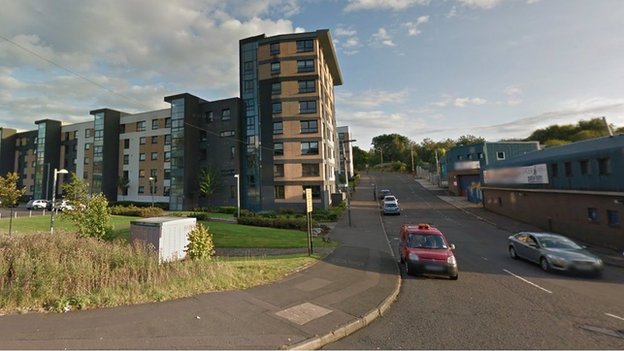 The woman was followed and attacked after getting out of a car in the Firpark Street area
A 26-year-old woman was raped on her way home from a night out with friends in Glasgow at the weekend.
Police said she was approached by a man who offered her a lift as she left the Sanctuary Nightclub in Dumbarton Road at about 02:15 on Sunday.
She got into a car, possibly a taxi, with him and another man. When she got out in Firpark Street, Dennistoun, one of the men attacked her.
Detectives have urged the driver and both men to come forward.
The woman became separated from her friends in the nightclub in the city's west end, police said.
The first man, believed to be in his late 30s, engaged her in conversation.
He was described as white, about 6ft tall, bald and with a heavy build. He was wearing jeans and a t-shirt.
The second man was also white, around 6ft tall, in his late 30s and bald. He too has a heavy build and was wearing a shirt.
'Extremely distressed'

Detectives said Firpark Street will be known to local people as the area where flats have been built at the rear of the Necropolis and the Royal Infirmary.
The taxi may have continued on to another destination.
Det Insp Liz McLean said: "This young woman thought these men were going to help her when in reality they were intent on causing her harm. She is extremely distressed by what has happened and it's vital we trace both men.
"In particular, we would like to speak to the taxi driver who collected the group as it's possible he can provide us with further detail which will enable us in tracing both these men."
at November 10, 2014