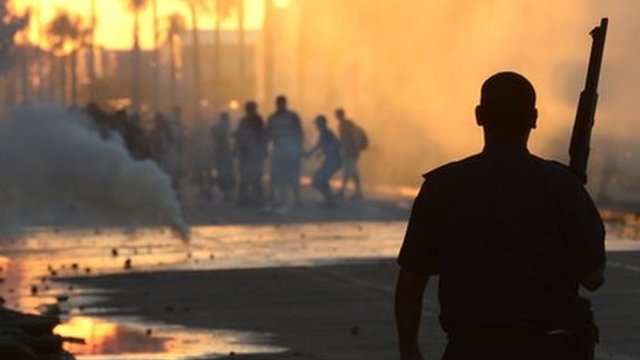 Two people have been killed in Argentina's third city, Rosario, as a wave of looting spreads.
Police fired tear gas and rubber bullets to stop hundreds of people attacking a supermarket on the outskirts of the capital, Buenos Aires.
There have been other incidents in the central city of Rosario and in the northern province of Chaco. The looting began in the south on Thursday.
The government says trade unions linked to the opposition are to blame.
Argentine television showed images of people - many of them with their faces covered - throwing stones at the police and trying to break into shops and supermarkets.
Continue reading the main story

Hugo MoyanoUnion leader
The attacks stir memories of the violence witnessed during Argentina's economic crisis in 2001 when unemployed people stormed supermarkets.
But National Security Secretary, Sergio Berni, said the looters this time had been taking plasma televisions and stereos, not food and had not been driven by poverty.
"There is a part of Argentina that wants to drive the country into chaos and violence," Mr Berni said.
"But this Argentina is not the same of 2001,"
The government has deployed 400 military police to the Patagonian ski resort of Bariloche, which witnessed the first incident of looting.
At least three supermarkets were looted there on Thursday by more than 100 people, who left with electronics, toys, clothes and food.
'Orchestrated'
Further attacks were reported in the industrial cities of Campana and Zarate, in Buenos Aires province, in Resistencia in the north and outside a Carrefour supermarket in San Fernando, on the outskirts of the capital.
Riot police managed to stop that attack but smaller stores and kiosks in the suburb were looted.
The mayor of San Fernando, Luis Andreotti, said: "This has been orchestrated. Someone has started all this to create an atmosphere of fear."
Buenos Aires province governor Daniel Scioli also says the disruption is politically motivated. 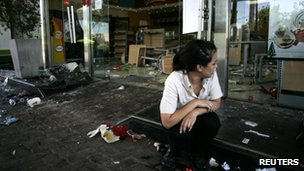 The police could not stop a convenience store being ransacked in San Fernando
But union leader Hugo Moyano, who opposes the government's economic policies, dismissed the government's accusations.
"This is probably triggered by the difficult situation the people of Argentina are facing. I cannot imagine that this has been organised by someone," said Mr Moyano, head of the powerful CGT union.
Private banks say inflation is again rampant in the country, though government figures have it at just 9%.
The IMF has threatened the country with a "red card", meaning potential expulsion from the Fund and the G20, if it does not do more to produce reliable statistics on its inflation and GDP.
Economists say Argentina's state-centric policies are damaging its growth.
New import restrictions mean that companies are allowed to bring in only the same volume of goods as they export.
In many cases, this seems to have had a devastating impact on industrial production.
Some analysts believe Argentina could now be in technical recession.
Former Finance Minister Orlando Ferreres says the biggest concern is political.
The left-wing populism embraced by President Christina Fernandez seems, he says, to exclude considered debate and a necessary change of strategy.
at December 22, 2012