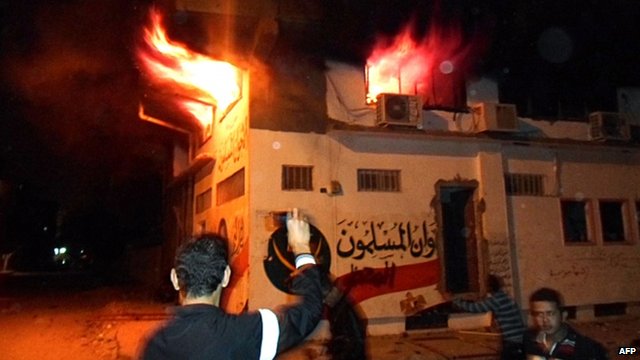 The Egyptian army has deployed tanks and armoured troop carriers outside the presidential palace in Cairo after clashes between supporters and opponents of President Mohammed Morsi.
The streets of the capital are now reported to be calm following the earlier violence that left five people dead and hundreds injured.
Egypt is seeing growing unrest over a controversial draft constitution.
The government insists that a referendum will go ahead this month.
The BBC's Jon Leyne in Cairo says the clashes are possibly the most dangerous development in Egypt's growing political crisis.
Our correspondent says the violence, which opposition leaders accused Mr Morsi's Islamist Muslim Brotherhood movement of organising, was ominously reminiscent of the tactics used by former President Hosni Mubarak during the revolution.
Supporters of Mr Morsi responded to a call to rally outside the presidential palace, in the suburb of Heliopolis, on Wednesday afternoon. 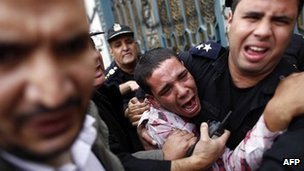 The Muslim Brotherhood has called on both sides to leave the area outside the presidential palace
The mainly secular opponents of the president were already staging a sit-in protest there, after tens of thousands of them besieged the palace on Tuesday.
Stones and petrol bombs were thrown and there were reports of gunfire as Morsi supporters dismantled some of the tents set up by their opponents.
The Brotherhood later called on all sides to "withdraw at the same time and pledge not to return there given the symbolism of the palace".
Disorder was also reported in other cities, with Muslim Brotherhood offices attacked in Ismailia and Suez.
'Loud and clear'
In a joint news conference, Mohamed ElBaradei, Amr Moussa and other leading figures of the opposition National Rescue Front said they held Mr Morsi fully responsible for the violence.
"Our opinion was, and still is, that we are ready for dialogue if the constitutional decree is cancelled ... and the referendum on this constitution is postponed," said Mr ElBaradei.
"The revolution did not happen for this. It happened for freedom, democracy and human dignity.
"Morsi must listen to the people, whose voice is loud and clear. There is no legitimacy in excluding the majority of the people," he said. 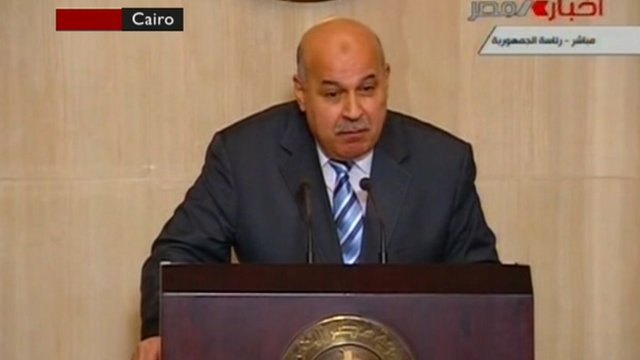 Vice-President Mahmoud Mekki: "Door open"
Speaking on Wednesday, Vice-President Mahmoud Mekki said the vote on the draft constitution was still scheduled for 15 December, but that the "door for dialogue" remained open, indicating that changes could be made to the document later.
Critics say the draft was rushed through parliament without proper consultation and that it does not do enough to protect political and religious freedoms and the rights of women.
The draft added to the anger generated by Mr Morsi passing a decree in late November which granted him wide-ranging new powers.
Four of Mr Morsi's advisers resigned on Wednesday in an apparent protest. Three others did so last week and Egypt's Mena news agency reported a further resignation on Thursday.
In his news conference, broadcast earlier on state television, Mr Mekki said there was "real political will to pass the current period and respond to the demands of the public".
But he said there "must be consensus" on the constitution, and that "the door for dialogue is open for those who object to the draft".
"I am completely confident that if not in the coming hours, in the next few days we will reach a breakthrough in the crisis and consensus," he said.
Our correspondent says the government has been speaking for some time about the need for dialogue, but has offered few concrete concessions which would end the crisis.
Mr Morsi adopted sweeping new powers in a decree on 22 November, and stripped the judiciary of any power to challenge his decisions.
Mr Morsi, who narrowly won Egypt's first free presidential election in June, says he will give up his new powers once the new constitution is ratified.
at December 06, 2012