The people of Equatorial Guinea ought to be among the world's wealthiest - but somehow the country's income from oil and timber doesn't reach them. Eight years after a failed coup, putting cash in people's pockets is not the president's priority.
Deep in the rainforest, a giant dome of steel and glass is the centrepiece of one of the most grandiose and expensive construction projects in all of Africa. The library of the new International University of Central Africa has the look of a spaceship docked in a jungle clearing.
Around the dome, a sprawling campus is taking shape.
Earth movers, cranes and international construction crews from as far afield as Brazil, Poland and North Korea are turning the dreams of President Teodoro Obiang - Equatorial Guinea's self-styled Guarantor of Peace and Propeller of Development - into logic-defying reality.
The university is but one small part of the president's ambition to build Africa's city of the future. Oyala will be the country's new capital, a multi-billion-dollar plaything for Africa's longest-serving dictator.
Down a newly-laid six-lane highway, dubbed the Avenue of Justice, Oyala's first luxury hotel is taking shape. It boasts 450 rooms, a spa, theatre and convention centre.

A championship golf course has already been carved out of the virgin forest.
"For me it's a dream park," says Vicente Cabrera, chief engineer at the new university, and my guide round Oyala. "I'm from Spain. Back home infrastructure and construction is dead. Here there are no limits."

But there are frustrations. The president himself is a frequent visitor. A university building recently had to be moved because he didn't like the view. Not surprisingly, the project is running late.
Every nail, brick and tile is imported. Equatorial Guinea is rich in oil, gas and timber but it manufactures nothing. Even the food consumed by the construction crews is trucked into the jungle from Cameroon.
Within a decade, Oyala will house the president, the government and - according to the master plan - up to 200,000 people. Where the inhabitants will come from is anyone's guess. The population of the entire country could fit into the city of Leeds, and the vast majority live far away, close to the coast.
Continue reading the main story 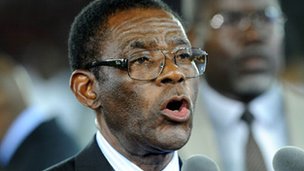 It's the remoteness of Oyala that makes it so appealing to President Obiang. In a rare interview he described how rebels had recently plotted a seaborne assault on his palace in the current capital, Malabo.
"We need a secure place for my government and for future governments. That's why we have created Oyala, to guarantee the government of Equatorial Guinea," he says.
The president's obsession with security is rooted in his past.
He came to power by way of a coup against his own uncle some 33 years ago - he's been suspicious of all political opposition ever since.
Internal critics and human rights activists who become troublesome are invited to reflect on their disloyalty in Equatorial Guinea's notorious Black Beach prison. Many opponents have been accused of conspiring with foreign powers to bring down the government.
The 2004 failed coup attempt led by the British mercenary Simon Mann (allegedly funded in part by Mark Thatcher, son of Margaret Thatcher, the former UK Prime Minister), served to fuel President Obiang's paranoia. Today the president remains convinced that the so-called Wonga Coup had foreign government backing.
Continue reading the main story

"That coup attempt was organised by certain powers, we know all about it," the president tells me.
"Margaret Thatcher's son was involved. Also other well-known personalities. It is not possible that it was organised in Spain, London, South Africa and in the United States without the knowledge of the security services in those countries."
Simon Mann was pardoned and released from Black Beach prison three years ago, but relations between President Obiang and Western governments remain complicated. They want access to his oil wealth without appearing to endorse his regime. 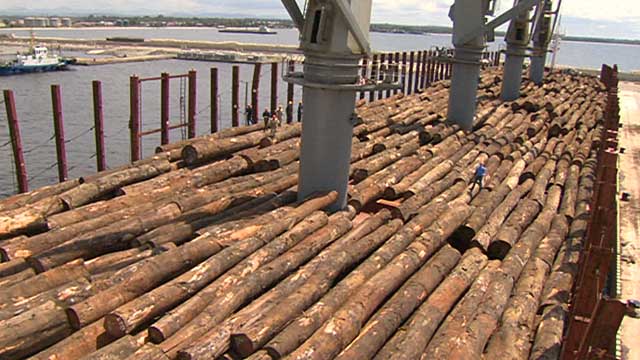 Swathes of the country's rainforest are being sold to China
For his part, the president is particularly vexed by the legal actions being taken against his eldest son - and likely successor - Teodorin, in France and the US.
A six-storey Paris mansion, and a fleet of 12 luxury cars belonging to Teodorin have been seized by French investigators. American officials are similarly seeking to confiscate a home in Malibu, a private jet and $2m of Michael Jackson memorabilia.
Continue reading the main story 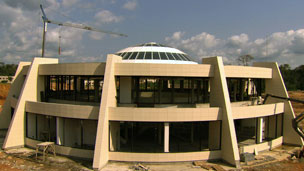 The US Department of Justice says Teodorin, a 40-year-old playboy who was recently appointed vice-president, diverted tens of millions of dollars of state revenues into personal accounts.
"The process in Paris is a farce, a political set-up," the president says.
"They are accusing my son of having illegally acquired these things but they have not sent a commission to this country to make inquiries.
"No-one steals here... On the contrary, what my government has done to this country is to increase the living standards of the people and provide better infrastructure."
But five minutes' drive from the presidential palace there is ample evidence that the country's vast oil riches are not trickling down to most of the people.
Briefly escaping the attentions of my government minder I meet a baker in a ramshackle neighbourhood of wood-framed, tin-roofed shacks.
"We don't have clean water, and we don't have any sanitation," he tells me. He gestures to the dirt track beyond his house. "It's OK now, but when it rains its impassable.'" 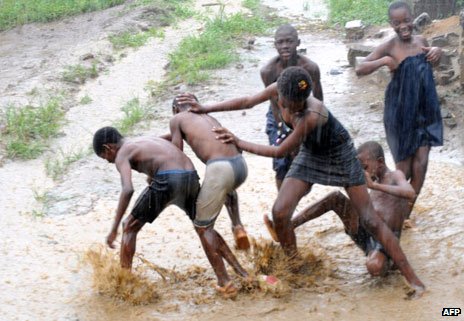 Equatorial Guinea is the third biggest oil producer in sub-Saharan Africa. In terms of per capita national income it is - on paper - one of the world's richest countries. But most of the population lives on little more than $1 a day. Average life expectancy barely reaches 55.
A youth in his twenties - another who must remain nameless - allows his anger to overcome his caution. "The president and his family are nothing but thieves," he says. "Yes, people are frightened, but one day there will be an explosion here."
For now, President Obiang, his family and his ruling party appear to be in complete control. In the last presidential election he won 97% of the vote. There's no reason to expect a different outcome when he faces re-election in 2016.
"It's a police state, just like North Korea," says the sole opposition MP, Placido Mico. "They use the oil money as a weapon against democracy."
I ask the 70-year-old president - the longest-serving non-royal head of state in the world - if he intends to remain in office to oversee the transfer of government to the new jungle capital, Oyala?
"It depends on the will of the people," he says. "When the people want something, we should not disappoint them."
at December 17, 2012

I think the admin of this website is in fact working hard in support of his website, since
here every material is quality based information.