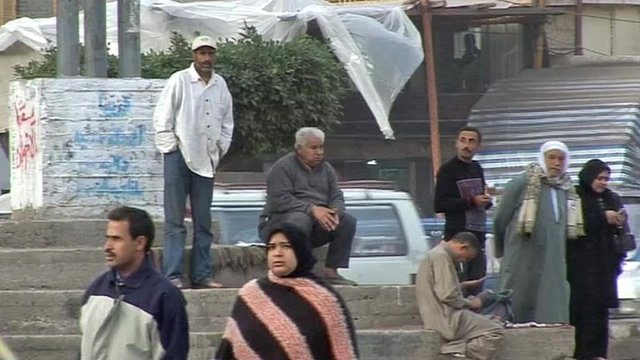 Egyptians have begun voting in a second stage of a constitutional referendum that has sparked weeks of unrest.
Opponents of President Mohammed Morsi have held huge protests to demand the referendum be scrapped, saying the new constitution favours Islamists.
Mr Morsi's mainly Islamist supporters say the constitution will secure democracy.
Some 250,000 security personnel have been deployed nationwide to try to keep order during the referendum.
Tension over the document has helped to fuel weeks of violence, including clashes in Alexandria on Friday.
Turnout was reported to be just above 30% in the first round, with unofficial counts suggesting some 56% of those who cast ballots voted in favour of the draft.
Official results are not expected until Monday, after appeals are heard. If the constitution passes, parliamentary elections must take place within three months.
'More unrest'
Ballots are being cast in the 17 provinces which did not vote in a first round on 15 December.
The areas are seen as more conservative and sympathetic to Mr Morsi's Islamist movement, the Muslim Brotherhood.
Analysts suggest this will favour a "Yes" vote.
Continue reading the main story

Constitution at a glance

"I'm voting 'No' because Egypt can't be ruled by one faction," Karim Nahas, a 35-year-old stock market broker voting early on Saturday in Giza, told Reuters news agency.
Egyptians casting votes in favour of the charter said they were voting for stability.
Opponents of the draft say it fails to protect the freedoms and human rights that they sought in the uprising that toppled former President Hosni Mubarak early last year.
Ahead of the second round, opposition politicians said they thought further violence was likely.
"I see more unrest," said Ahmed Said, head of the liberal Free Egyptians Party and a member of the opposition coalition.
He said there had been "serious violations" on the first day of voting and that anger towards the president was growing.
Opposition figurehead Mohammed ElBaradei has urged people to vote against the charter.
"We know that if this constitution is passed, there will be no stability," he said late on Thursday. 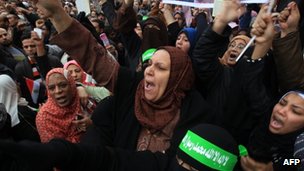 Supporters of President Mohammed Morsi say the constitution is vital to move Egypt towards democracy
Egypt's latest crisis began on 22 November, when Mr Morsi issued a decree granting himself broad powers.
The decree stripped the judiciary of any power to challenge his decisions.
After an outcry, the president revoked much of the decree, but he refused to back down on the draft constitution.
The country has seen mass demonstrations on both sides ever since.
On Friday, Islamists clashed with secular rivals in Alexandria, hurling stones at each other outside a mosque.
Police formed lines and fired tear gas to keep the two groups apart.
The state news agency Mena quoted the health ministry as saying that 32 people had been injured.
at December 22, 2012