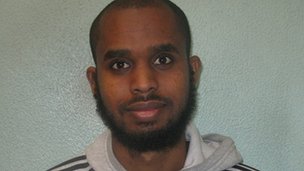 Detectives have asked for help to trace a man believed to have absconded from a TPim terror control measure.
Police say Ibrahim Magag, 28, who is of Somali origin, is not considered to "represent a direct threat to the British public".
TPims replaced control orders in January 2012, amid some controversy.
Home Office minister James Brokenshire said: "We do not believe his disappearance is linked to any terrorism planning in the UK."
He added: "The Terrorism Prevention and Investigation Measure in this case was intended to prevent fundraising and overseas travel."
TPims restrict the movements of people thought to pose a risk to the public, but who cannot be tried for reasons of national security.
The identity of people under TPims are usually kept secret, but an anonymity order imposed on Mr Magag has been lifted following a request by the police.
Police were alerted when he "failed to meet his overnight residence condition" on the night of Boxing Day.
'Call 999'
Metropolitan Police Service counter-terrorism detectives have asked people to call 999 if they see him, and not approach him directly.
Continue reading the main story

National security is the government's top priority and the police are doing everything in their power to apprehend this man as quickly as possible.”

James BrokenshireHome Office minister
Mr Magag is said to be 6ft 2in tall, of slim to medium build, with a beard, although police say it is possible he may try to change his appearance.
He was last seen in the Camden area at 17:20 GMT on Wednesday.
He was wearing a khaki robe, a black Berghaus windcheater and navy Converse trainers.
In March it was revealed nine British citizens were subject to TPims.
In June another man was charged with breaching the conditions of his.
Those subject to a TPim can be ordered to stay overnight at a specified address and report to a police station every day.
Other measures include a ban on contacting particular individuals, going to certain areas and places and travelling abroad.
Mr Brokenshire said: "National security is the government's top priority and the police are doing everything in their power to apprehend this man as quickly as possible.
"The home secretary, on police operational advice, today applied to the High Court for an order protecting anonymity to be lifted in order to assist with their investigation."
Police have asked anyone with information about Mr Magag, who was last seen in Camden on Boxing Day, to contact the anti-terrorist hotline on 0800 789 321.
at December 31, 2012