The Queen sat between David Cameron and William Hague at cabinet
The Queen has become the first monarch since 1781 - the time of the US war of independence - to attend a cabinet meeting in Downing Street.
Prime Minister David Cameron greeted the Queen at the door of Number 10, posing for photos before going inside.
She met ministers, who were presenting her with a gift to mark her Diamond Jubilee after 60 years on the throne.
She sat in the PM's usual seat - with Mr Cameron and Foreign Secretary William Hague sat either side.
It is believed to be the first time a monarch has attended peace-time cabinet since George III in 1781. George I ceased to chair cabinet in 1717.
The Queen's father, King George VI, attended war cabinet during the Second World War.
Jokes
Her car, accompanied by motorcycle outriders, arrived shortly after 10:05 GMT.
Members of the cabinet had already arrived, while a man with a broom had swept the red carpet, laid in front of the door of Number 10 for the occasion.
Once inside, the Queen was introduced to each of the government's senior ministers in turn, as they bowed or curtseyed. 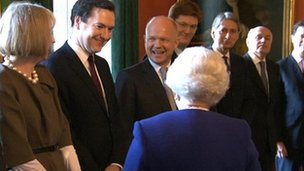 The Queen met members of the cabinet before the meeting began
She shared jokes with Chancellor George Osborne, Defence Secretary Philip Hammond, and Deputy Prime Minister Nick Clegg.
After the Queen and the cabinet had taken their seats, Mr Cameron formally welcomed her to the meeting and outlined the items of business on the agenda.
It began with Chief Whip Sir George Young talking about the change to royal accession rules, to allow a first born girl to become head of state even if she has a younger brother.
There were also updates on the forthcoming parliamentary business and Ken Clarke spoke about prospective justice measures.
There was a much larger than usual press pack opposite No 10, although no questions were shouted at the Queen as she arrived.
While the Queen is head of state, her involvement in day-to-day political decisions is largely formal.
The prime minister visits her regularly for an audience where he updates her on events, while she is also expected to rubber-stamp ministerial decisions at meetings of the Privy Council.
The Queen plays a central ceremonial role in the state opening of Parliament, when she travels by ornate horse-drawn coach to the House of Lords to read out a speech prepared by ministers unveiling details of their legislative plans.
She also retains the power to appoint the prime minister.
'Constitutional landmark'
The prime minister's spokesman said the Queen would spend about 30 minutes at the meeting.
The spokesman said he imagined she would speak, despite being described as an observer.
Rodney Barker, professor of government at the London School of Economics, said the plan was "daft", because "it will mean potentially the Queen will know things she is not supposed to know and hear things she is not supposed to hear".
But Professor Jane Ridley, biographer of Edward VII, disagreed, telling BBC Radio 4's Today it was "testimony of the Queen's ability to elevate the monarchy above politics" that she could attend cabinet.
It was a "constitutional landmark", she added.
Former Cabinet Secretary Lord O'Donnell told BBC Radio 4 that he thought the visit was the "right thing to do" - the Queen was above politics, "for the whole country, for everyone".
"I'm sure cabinet want to do this because they want to say thank you. I mean, I've always viewed the Queen as kind-of the ultimate public servant. You think what she's done during her jubilee period and they just want to say thank you," he added.
He said that there had been other people attending cabinet in the past - such as business bosses during regional cabinet meetings, and someone like Lord Coe for presentations on specific events, in his case the Olympics.
at December 18, 2012