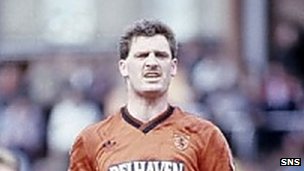 Former footballer Charlie Adam has died, aged 50.
The former footballer Charlie Adam has died suddenly. He was 50 years old.
Tayside Police said they were called to Grampian Gardens in Dundee at about 18:30 on Monday following the death.
There were no suspicious circumstances but a report will be submitted to the Procurator Fiscal.
As a midfielder, Mr Adam played with clubs including Dundee United and Partick Thistle. His son Charlie is a Scotland international and plays for Stoke City.
at December 18, 2012