Somalia's journey from disaster to resilience a test case for development 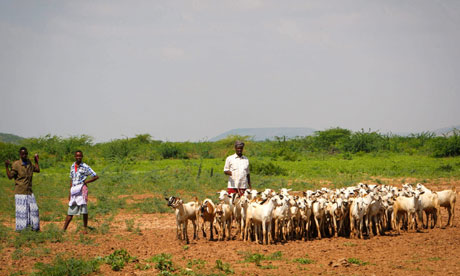 Livestock herders near the central Somali town of Belet Weyne in the Hiiraan region. Photograph: Stuart Price/AU-UN IST/EPA
When the UN declared famine in Somalia in July last year, it was a disaster foretold as there had been plenty of warnings in the lead-up to the crisis.
The first indications that a disaster was looming came as early as December 2010, but the world was slow to react, with NGOs such as Oxfam describing the international donor response as tardy and inadequate. The subsequent famine killed tens of thousands of people, but, a year on, the country is slowly recovering, with a semblance of normality returning to Mogadishu to the extent that football – once banned by al-Shabaab – is being played again.
Somalia remains fragile with about 3.8 million people in need of life-saving assistance, out of a population of 9.5 million, and 1.4 million people internally displaced. Given the country's precarious condition, the UN this week launched a $1.3bn (£807m) appeal for Somalia for the next three years.
The appeal is a test of the resilience-building approach to managing disaster, much discussed by humanitarian and development agencies but difficult to put into practice because of institutional rivalries and the problems of co-ordination.
"Resilience is simple as a concept but it's such a challenge to the system," says Luca Alinovi, who is in charge of the Food and Agriculture Organisation (FAO) in Somalia. "It is very difficult to implement."
The $1.3bn appeal will be for 369 humanitarian projects. The FAO, the World Food Programme (WFP) and the UN children's agency (Unicef) will lead this programme, which will involve 177 national and international NGOs and other UN agencies operating in Somalia.
"This is the first time all three agencies have taken such a strong commitment together," said Alinovi in an interview in London, adding that the three-year programme marks an attempt to blend humanitarian and development efforts, breaking with the "linear" thinking on emergencies. "All the current logic is based on sequencing," he said, with humanitarian agencies moving in first to deal with an emergency before development workers take over.
In Somalia, however, that approach does not fit the reality where the crisis is so deep it does not allow people to bounce back. One reason the appeal is for more than three years, rather than just one, is to provide support over time that will – it is hoped – enable Somalis to become self-sufficient. "It is a single strategy, a single concept with all three agencies working on resilience, and there is zero cost on co-ordination with all our teams realigning themselves," Alinovi says.
The EU is making its own attempt to bring the humanitarian and development silos closer with its two flagship resilience initiatives, Supporting Horn of Africa Resilience (Share) and l'Alliance Globale pour l'Initiative Resilience Sahel (Agir).
Share, launched by the European commission last year with commitments of €270m (£219m), is designed to improve the opportunities for farming and pastoralist communities, and the capacity of public services to respond to crises. Agir, launched in June as the Sahel crisis was taking hold, lays out a roadmap for better co-ordination of humanitarian and development aid to protect the most vulnerable people when drought hits again.
The UN's three-year programme for the Horn will involve cash transfers ($78 a month during the famine), providing agricultural inputs (fertilisers and seeds) and mass vaccination campaigns for livestock. At least 14 million livestock have been vaccinated against pestes des petits ruminants (PPR), an acute and highly contagious viral disease of sheep and goats. The goal is to reach 170,000 households or 1 million people in Somalia, Puntland and Somaliland in three years.
Alinovi says the UN programme will have to deal with politically charged issues such as land tenure, disputes between pastoralists and farmers, and overfishing by foreign vessels as Somalia has no exclusive economic zone around its waters. There is also the risk that UN agencies, working with NGOs, will set up parallel structures that compete with a weak, fledgling government.
Another potential problem is whether the region can absorb the flow of cash and whether it will end up with those it is designed to help. Various techniques will be introduced such as biometric fingerprinting to ensure the right people are collecting cash transfers from money vendors. With budgets tight at home, donor governments want to see value for money, but overzealous monitoring is expensive, which means less money for Somalis themselves. As Alinovi says: "You cannot zero the risk, and governments have to accept that."
Some have cautioned against making resilience a new development paradigm. Christophe Béné, research fellow at the Institute of Development Studies, has argued that resilience is not necessarily pro-poor as there is no direct and obvious way out of poverty through resilience. Households can be very poor and very resilient, argues Béné.
Alinovi is well aware of this trap, having wrestled with the question of whether resilience is a "placebo for people to survive". He believes the $1.3bn could provide a critical mass in terms of funding for Somalis. "Somalis are entrepreneurial by nature and if they have enough support for some time, they can come out of their present situation," he says. "Stability comes from a willingness by people to share resources, but at the moment they have nothing to share."
at December 08, 2012