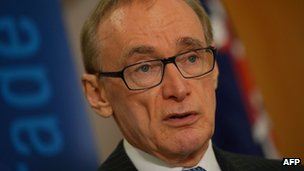 Foreign Minister Bob Carr says a report alleging Chinese hackers stole plans for Australia's new intelligence hub will not hit ties with Beijing.
On Monday the Australian Broadcasting Corporation reported blueprints setting out the building's cable layouts and security systems had been illegally accessed by a server in China.
Mr Carr did not comment directly on the claims.
But he said the government was "very alive" to cyber security threats.
"I won't comment on whether the Chinese have done what is being alleged or not," he said.
"I won't comment on matters of intelligence and security for the obvious reason: we don't want to share with the world and potential aggressors what we know about what they might be doing, and how they might be doing it."
But he said the ABC report had "no implications" for a strategic partnership. "We have enormous areas of co-operation with China," he said.
'Listen in'

The claims were made in a report on Chinese cyber-espionage by ABC's Four Corners investigative programme on Monday night.
The programme alleged that blueprints to the new intelligence headquarters in Canberra - due to be finished last year but delayed - were stolen in a cyber attack on a contractor that was traced to a server in China.
The plans detailed communications cabling and server locations, floor plans and security systems, the programme alleged.
It quoted Professor Des Ball, an expert on cyber security from the Australian National University, as saying access to such details would enable an outside party to identify rooms used for sensitive activities and work out how to monitor them.
The programme also alleged that the Prime Minster's Office, the Defence Ministry and the Department of Foreign Affairs had been breached in hacking operations.
Four Corners did not identify the source of its information.
Chinese Foreign Ministry spokesman Hong Lei rejected the claims, saying "groundless" accusations would not solve the problem of cyber hacking.
"Since it is technically untraceable, it is very difficult to find the source and identify the hacker,'' he said. "Therefore we have no idea what is the evidence for their report in which they make the claim with such certainty.''
Earlier this year, hackers from China - which is now Australia's biggest trading partner - were thought to be behind an attack on the Reserve Bank of Australia, the Australian Financial Review reported.
The issue of cyber espionage looks set to be high on the agenda when the US and Chinese presidents hold their first summit in California next month.
Earlier this month, the Pentagon for the first time directly accused the Chinese government and military of targeting US government computers as part of a cyber espionage campaign aimed at collecting intelligence on US diplomatic, economic and defence sectors.
China called the report "groundless", saying it represented "US distrust".
at May 28, 2013