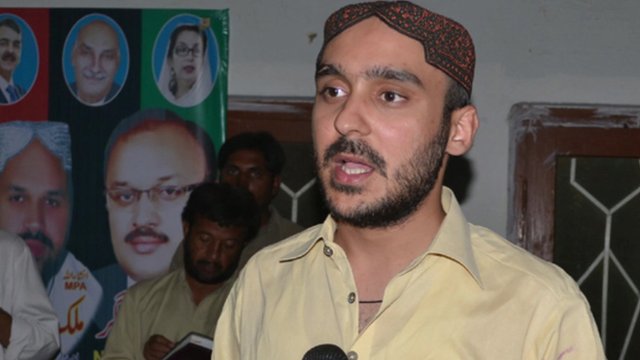 The son of former Pakistani Prime Minister Yousuf Raza Gilani has been kidnapped by unidentified gunmen during an election rally.
Mr Gilani told the BBC his son Ali Haider - a candidate for the Pakistan Peoples' Party (PPP) - was seized in the central city of Multan.
He accused his political opponents of being behind the attack, which came ahead of Saturday's elections.
One person was reportedly killed when the attackers opened fire at the rally.
No group has so far claimed responsibility for Thursday's attack.
Taliban threats 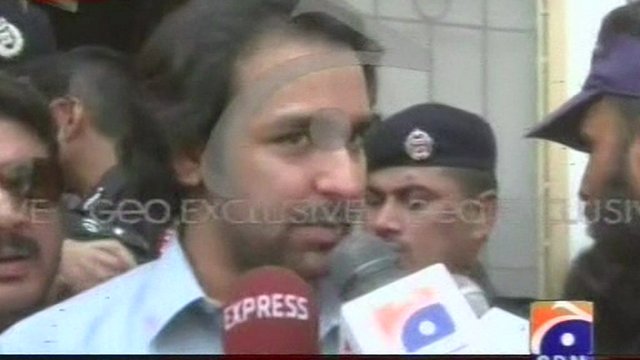 Ali Musa Gilani: "If we don't get my brother tonight, I will not let the election happen"
Eyewitnesses say the gunmen arrived at the gathering in a black Honda car and on a motorbike.
"A couple of them started shooting," a teenager at the rally told Pakistan's Geo TV.
"A man standing in front of Gilani was hit and fell down. Then they grabbed Gilani, put him in the car and sped away."
Reports say the person who died in the shooting was one of Ali Haider Gilani's aides. Another five people were injured.
Some of those who saw the attack say there was also blood on Ali Haider. Pakistan's Express Tribune newspaper quotes eyewitnesses saying he was hit by a bullet, but this is not confirmed.
Continue reading the main story

M Ilyas KhanBBC News, Islamabad
It's not clear who kidnapped Mr Gilani's son, but many will suspect the Pakistani Taliban.
They have openly threatened the governing PPP and other secular parties in Pakistan. A string of attacks has all but prevented them from campaigning.
Already suffering from the incumbency factor and charges of economic mismanagement, the governing party has been largely unable to get its message across to voters and defend its record in office as a result.
Meanwhile, the two politicians seen as most likely to do well on Saturday - Nawaz Sharif and Imran Khan - have conducted a more or less free campaign, holding huge rallies around the country.
Among other policies, their opposition to the US-led war against militants plays well with that part of electorate which is anti-West, conservative and pious - for which reason the militants have left them alone, many believe.
But it's too early to write the PPP off. In Pakistan you never know what will happen, and Saturday's winner is anyone's guess.
Ali Haider - the youngest son of the ex-prime minister - is contesting a seat in the Punjab provincial assembly.
"We want our brother back tonight. If we don't get him, we will not allow elections to be held in our area," his elder brother Ali Musa - who was in tears - later told reporters.
Police have now sealed off all entry and exit points in Multan, and a massive search operation is under way, local media report.
Yousuf Raza Gilani served as prime minister until June 2012, when he was forced out of office by the Supreme Court over his refusal to pursue a corruption case against President Asif Ali Zardari.
But the Gilanis are still a powerful political family, with the two sons standing in elections to the provincial and national assemblies, the BBC's Mike Wooldridge in Islamabad reports.
Who was behind Thursday's attack, and their motive, remains unclear.
Kidnapping is a tactic frequently used by militants and criminal groups across Pakistan. Ransom is an important revenue stream for the Pakistani Taliban and hostages can be used as bargaining chips in negotiations with the authorities, the BBC's M Ilyas Khan in Islamabad says.
Among the most prominent Taliban hostages is Shahbaz Taseer, the son of assassinated Punjab governor Salman Taseer, who was snatched in Lahore in 2011 and remains in captivity.
Sharif's pledge
The run-up to the 11 May elections has been marred by a series of attacks across the country in which more than 100 people have been killed.
Continue reading the main story

The Pakistani Taliban have attacked the PPP, the Awami National Party (ANP) and the MQM party for being secular, preventing them from campaigning normally. The militant group has also pledged to carry out suicide attacks on polling day.
To counter the threat, the military has pledged to deploy tens of thousands of troops to polling stations.
On Wednesday, Nawaz Sharif - the man tipped to be Pakistan's next prime minister - promised to end the country's involvement in the US-led war against militants if elected.
Mr Sharif - who leads the Pakistan Muslim League-N (PML-N) - told the BBC the move was necessary for there to be peace in Pakistan and elsewhere in the world.
Pakistan has been part of the US-led fight against Islamist militancy in the region since the 11 September attacks in the US in 2001.
Continue reading the main story

The tiger is the party symbol of Mr Sharif's Pakistan Muslim League-Nawaz (PML-N). When his supporters are asked who they are gong to vote for in Saturday's election they typically reply, 'The tiger'”

Owen Bennett-JonesBBC News, Lahore
Mr Sharif's remarks may cause concern among Western leaders, the BBC's Orla Guerin reports from Islamabad.
However, Mr Sharif - who served as prime minister twice in the 1990s - declined to say whether he would stop military operations against the Taliban and al-Qaeda.
Meanwhile, Imran Khan - another politician tipped to do well - is continuing to recover in hospital after falling off a makeshift lift at an election rally earlier this week.
Doctors say that the former cricketer - who leads the Tehreek-e-Insaf (Movement for Justice) party - received stitches in the head and treatment for injuries to his spine.
at May 09, 2013