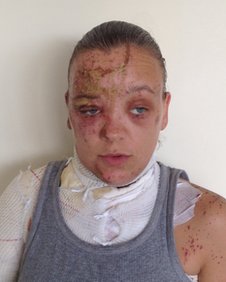 A 15-year-old boy has been arrested in connection with an acid attack on a woman at her home.
The 28-year-old victim, called Tara, is being treated at a specialist burns unit after suffering injuries to her face and upper body in the attack in Romford, east London.
She was attacked as she answered her door on the night of 30 April.
The teenager was arrested on Saturday night and is being questioned at an east London police station.
Tara, who asked for her surname to be withheld, answered the door to a stranger who asked to speak to "Michelle".
'Devastated'
He returned about 30 minutes later and squirted an acidic substance in her face from a bottle, according to police.
Last week Tara said: "I feel devastated and am coming to terms with the fact I might have to bear the scars of this cowardly attack for the rest of my life.
"I was at home with my family at the time. It doesn't bear thinking about that this could have been one of the children instead of me as the man didn't even look up when threw it at me.
"He is a coward."
The Crimestoppers charity has offered a reward of up to £3,000 for information leading to the capture of the person responsible.
at May 12, 2013