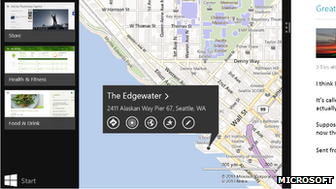 Microsoft has confirmed a Start button is returning to the desktop mode's taskbar of its Windows 8 operating system.
The lack of the facility - which had been in every previous version since Windows 95 - has been one of the most controversial aspects of the software.
However, it will not offer all the functionality previously associated with the feature.
Instead it will bring users to the recently-introduced "Metro" interface.
"We've improved the way you navigate to Start with the mouse by changing the Start 'tip' to be the familiar Windows logo," the companysaid in a blog post.
"The new tip appears anytime you move the mouse to the bottom left corner of the screen, and is always visible on the taskbar when on the desktop."
On current versions of Windows 8, the start tip would only appear when users hovered their cursor over the lower-left corner of their screen.
In the 8.1 update, the area will be more visible.
A left-click on the tip will bring up a tile-based Start Screen - formerly known as the Metro interface - designed for touch-screen users.
A right-click will display a small menu of other options such as Event Viewer, Device Manager and Disk Management.
Another change will allow users to boot their computers directly into desktop mode, meaning they can avoid ever using the Start Screen if they wish. 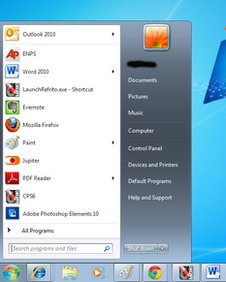 The Windows 7 Start button triggered a menu with apps and other links
Many users had complained that ditching the traditional Start Menu and introducing the Start Screen had made the system less straight-forward to use, meaning businesses which adopted it would need to retrain staff.
'New Coke'

Microsoft had been stung by claims that the expected reintroduction of a Start button would mark a major U-turn.
An article in the Financial Times described the move as one of the "most prominent admissions of failure for a new mass-market consumer product since Coca-Cola's New Coke fiasco nearly 30 years ago" - making reference to the soft drinks company's decision to ditch a new recipe after overwhelming customer dissatisfaction.
Microsoft later issued a statement saying it was "unfortunate" the FT did not represent the "good response to date on Windows 8."
A preview download of Windows 8.1 will be released to the public in June, and a final version before the end of the year. Both will be free of charge to existing users.
'A fudge'

Chris Green, principal technology analyst for the Davies Murphy Group, told the BBC he did not think the change would be enough to silence the critics.
"What they're proposing to do is a bit of a fudge.
"It's the bare minimum to say they've addressed people's complaints while not having to really backtrack on anything."
He said Microsoft faced a challenge in being able to innovative with Windows while also keeping its vast user base comfortable.
"When new operating systems come along, same with major applications, everything moves around. People hate it because they have to re-learn from scratch."
Other changes that will appear to users running the update include:
Follow Dave Lee on Twitter @DaveLeeBBC
at May 30, 2013

To mask odors, place a smallish dish of vanilla extract in the refrigerator.
As people build tools away from iron rather than bronze, the
The form of iron Age began.